Between pandemic fears and homeschooling horrors, only a very few things have remained constant. I had to give up my running group, and the bootcamps I teach, first due to physical distancing regulations, and then due to my-children-are-always-at-home.

I had to give up the luxury of my “second office,” Starbucks. I didn’t work there often, no more than once every three weeks, but I had to give up the idea of having another option besides sharing the dining room table with the three kids (distracting and bickering-y), or my beautiful old secretary desk (more than arm’s-length away, no direct line of sight to children not doing schoolwork).

Way back before March, a trip to my “second office” always started with a nice long walk with Ziggy. First stop: the dog park, involving as much frolicking and racing around after balls and other dogs as possible. I didn’t play; I was weighed down by my Writerly SatchelTM, that held his favourite (small) blanket to lie down on and a chewy stick and some treats to keep him occupied so I could work. I also brought along another relic of the time before COVID: my reusable cup. (I’ve had to chug down still-steaming hot latte too many times from giant Starbucks mugs when Ziggy’s decided he’s had enough and wants to be outside again.) Now, the environment is back to dealing with disposable cups.

My satchel is a gorgeous old leather Roots bag that I found online after a trip to Florence in which we ran out of time to find me a new purse (I don’t buy expensive purses, but decided that, if I were to have a souvenir, it might as well be something that I’d use for years), but then I also refused to buy one in the airport, on principle. I got home, with my leather-purse-pocket money still burning a hole in my…well, my pocket, and decided I’d rather have one from Roots instead, a Canadian brand that I’ve always loved, but by whose prices I have always been horrified by. But, I had permission, pocket money, and while new ones are still far too much for my thrifty self, they last forever. Mine was from Ebay, at a really decent price – £50 pounds instead of £300. Yes, it’s used, but in a someone-else-broke-it-in-so-it-looks-just-right way. Sold.

I’d go in to the Starbucks close to the park, set up my mobile hotspot from my phone, and sip my chai latte or London Fog while Ziggy worked away at his chewy.

Did I get more done in Starbucks than at my desk? No, but I got things done. I blocked out distractions (that weren’t Ziggy, at least), and got to feel like a writer in public. Satchel: check! Notebook: check! Laptop: check! Look at me, I’m writing!

Here at home, there is less of that pride. Hey, we’re all sitting around the dining room table, the kids on their school iPads, me on my laptop, all trying to work, trying to stay focused, trying to drink my tea before it gets cold. (Ziggy, however, is much more relaxed.)

Green tea is for the morning. I start with a cup of flavoured green tea from my growing stash of tins and teas. Dragon Fruit, Berry Blend, Sencha Rose, Mint. Around ten, when the kids take a break, I choose another, boiling the water, then letting it sit while I fill up my little Nessie tea diffuser with loose tea, waiting for the temperature to drop to about 97, then steeping it for two, sometimes three minutes.

Camping tea is necessarily different. You pour boiling water into your mug,  pop in your teabag, and leave it there till noon, topping it up with hot water every half an hour or so.

After lunch, anytime up to 3 pm, I switch to black tea. Plain PG Tips, Assam, Ceylon or Earl Grey, each with a splash of milk. It’s warming and heartening.

After 3, the caffeine will keep me awake at night. Herbal (no milk), any one of a giant selection from my tea box, keeps me company on the couch after the kids go to bed, and helps me not miss wine too much during the week. Late, late-night tea is always my Insomniac Blend.

On weekends, I splurge and make myself and the kids lattes.

It’s fine, lovely, in fact. I love the tradition and ritual of tea, and I love that my kids love it too. We make a pot of Masala Chai or London Fog or Monster Mash, and serve it with biscuits. They add their own milk and sugar — probably too much, but that’s ok too. 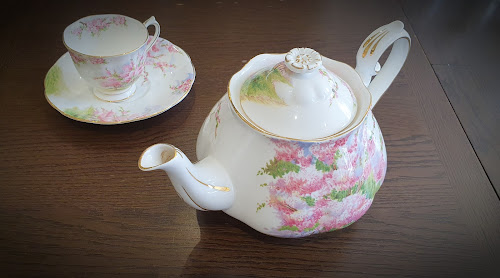 We joke about “savings from Starbucks” — that, on top of saved transit fares and lunches on the go, and any other sundry amounts that get spent when you actually leave the house, we’re also not spending £12 a week on coffee (him) or £9 a week on tea lattes (me). Plus the £20+ it costs to stop there “for snacks” for the kids on the way to the park or while running errands on a Saturday.
I shudder. That’s who we were, and who we never wanted to be.
I justify ordering from Hebden Tea (£20 of tea, free shipping) and buying him nice coffee beans, that he grinds up in his new manual burr grinder and brews every morning before joining us in the dining room too.

We miss leaving the house, and offices, whether cafés or real. But here, we are safe, we are healthy, we have tea. That will have to do.