Dammit Karen takes the family to Tuscany and it is SPECTACULAR (travel review).

Our fortunate family of five recently had the opportunity to explore Tuscany for a week in August. We are very grateful to be able to access a set of subsidized chalets across Europe for our holidays (over the last two years here, we’ve discovered Austria and Croatia as well), and were excited to experience Italy, especially in “farmstay lodgings” on an estate winery, the Castello del Trebbio.

(note: if you’re reading this on a mobile phone, turn it sideways – the formatting’s gone wonky)

Within a few days of booking, we received an email from Alberto, the manager of the estate, with a comprehensive welcome package attached. He gave us recommendations for activities, dining and touring. He asked us to confirm the number of occupants (five) and ages (our kids are 6, 9 and 10), and offered to set up some activities and reservations for us. We responded fairly promptly, and then all we had to do was eagerly await our trip!

Chris wanted to drive (hey! it’s only 19 hours in a car with three kids!), but when we crunched the numbers (food, gas and hotel), it was cheaper to fly and rent a car. Thank God for math. We flew into Florence via Zurich (with a 5-hour stopover)(see? cheaper). While waiting for the next flight, I spent a lot of time on a website called visitflorence.com, which had walking tour suggestions, driving-in-Florence information, parking queries…really everything we needed was there. I referred to it several times over the week, and highly recommend it.

We arrived in suffocating heat – it was 36 degrees when we landed, and 37 degrees the next day – which made sightseeing unbearable (without gelato, that is – something that was quickly remedied, and of course, became an almost-daily experience). After a few hot, sweaty hours of exploring old Florence, we took the tram back to the airport, picked up a bright blue Jeep Renegade (practical for a family of five, unless you’re in the skinny streets of Florence!), and drove out of the city, up steep, hairpin-turning hills, to the Castello del Trebbio.

Set in the Chianti Rufina region, the beautiful 12th century castle has been witness to historical battles, family dramas and conspiracies. It is still an active winery and is inhabited, though the owner allows tours at set times. Several stone outbuildings have been converted into five apartments and two stand-alone villas.

Our apartment (Panicale B) slept the five of us nicely, with a large loft containing a queen bed and ensuite, a second, main-floor bedroom with two twin beds and an ensuite, and a pullout couch. And air conditioning, thank God! The kitchen was modern enough to feed us breakfast and lunch every day (grocery stores were a twisty 15-minute drive away), wi-fi was included, and there was a large TV with Netflix. As well, we found puzzles and games in various cabinets to occupy us in quiet times.

The view was breathtaking from every window and door: hills, valleys, vines and olive groves. We ate our meals outside on a covered porch with spectacular views, not least the entertaining little geckos that frolicked in the sun. Out the back door, the pool and deck again boasted stunning views. The pool was a good size, holding about eight people and their floaties. The water was bright green for the first three days of our stay, but by the fourth day, it was blue again. It didn’t slow our kids down at all!

We took a long walk around the property, up and down the steep hills, through olive groves and along paths to the grapevines. We couldn’t walk through the vines (the estate had electrified fences to stop wild boars from eating all the grapes), but it was still very cool. We even found wild boar tracks!

Alberto had made a reservation for us at the Castello’s restaurant (La Sosta del Gusto) at the first seating, 7:30 pm. (This is very early to eat in Tuscany, we discovered repeatedly.) We sat on a large patio with fairy lights strung overhead as the sun set over the mountains around us. It was magical. The children were served first (from a basic children’s menu of burgers, chicken nuggets and pasta), so became bored well before we finished our prima, then secondi, then dolce. They rallied when we told them to explore some more, and especially when we said they could (gasp!) go get their tablets while we finished our quite-probably-could-have-been-romantic meal. 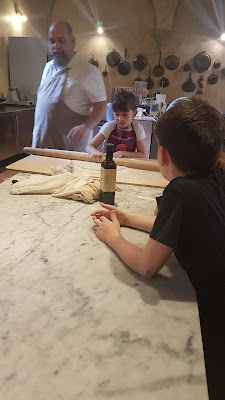 Alberto also booked us on a castle tour, in which our charming-and-multilingual guide Constanza showed us around the beautiful building including the Conspiracy Room where the assassination of Lorenzo di Medici was planned, then took us down through the cellars and dungeons where their winemaking operations are in progress.

After the tour, one group stayed in the courtyard for wine tasting, while the rest of us went into the Castello’s kitchen for a hands-on pasta-making class with a very large, gruff chef named Jerry. The kids were delighted by him. We all donned the provided aprons and learned how to make our own pasta (from scratch) and two simple sauces. Once everything was prepared to Jerry’s satisfaction, Constanza led us into the Castello’s ancient dining room for good conversation and a delicious dinner with wine pairings (the kids got sips, too!). We did their bottles justice, and took the recipes home with us. 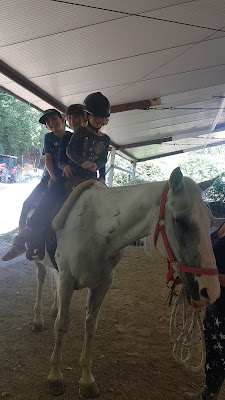 Constanza was kind enough to call a local stable to set our children up with a horseback riding lesson. Sylvia from Tenuta dei Cavalieri gave each of our beginners exercises and drills that had them literally turning in circles while their horse walked around the ring. They’re already pestering us to go back next year so they can go to their camp.

Other spot-on recommendations from Alberto: 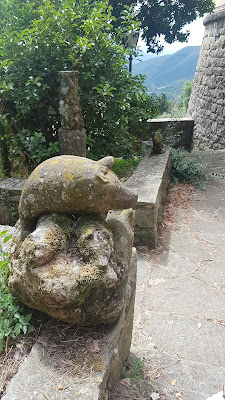 Grotto of Santa Brigida – we couldn’t find it on a map, but a local man kindly led us to the ruins of a church bombed in 1944. It’s a quiet, magical place surrounded by stone and statues.
Collodi and Pisa – blog post here.
Florence – again, I recommend relying on visitflorence.com, but there’s so much to see! We also did a Florence city trail from Questo.

We’re tempted to make the trip again! Although we know our time in Europe is limited and want to explore as much as possible of this part of the planet before we move back to Canada, it was truly a perfect holiday. We brought home wine and olive oil (and lots of mosquito bites – pack bug spray!) and so many good memories. Our hosts (and, indeed, everyone we met) were so helpful and gracious, that we are considering another trip to Castello del Trebbio next summer.     ~Ciao!