(This was not posted after the eggcitement of Easter, so I’m posting now.  Enjoy!)

There are unique challenges to travelling with a family of five especially when one of them is Chris.

The world is not built for that fifth person.  Restaurants, hotel rooms with two double beds, rollercoasters… all of these easily hold a family of four or less.  But when you add one more person in, whether they be small, pale and ginger-haired, or tall and somewhat cranky, things just get harder and/or far more expensive.

Over the 12-days-too-long Easter break, we took another caravan holiday, this time with Chris along.*

We started with choosing the where. Lincoln had been highly recommended to us, and even though I was hoping for someplace warm, we were concerned enough with the fallout from April’s Brexit deadline (kaff – at the time of booking – kaff) to decide that we should see some more of our host country.

So far, we’ve cut a very small slice out of England, from the Isle of Wight to Portsmouth to Oxford to Salisbury to Kent (camping!) and Dover (ferry to France). So going North was in the cards.  Of course, I want to go to York.  Haworth, moors, Secret Garden and Brontes: all of that must happen over the next two years. But, friends said that Lincoln was like York, but smaller, quieter and less expensive, and closer.  These were all good things. 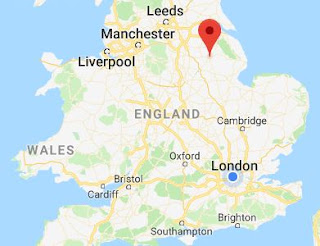 I wanted a family-friendly place, ideally where kids could run free outside and I could sit with a cup of tea (and/or mug of morning wine), preferably with the dog. We found a few Airbnb caravan rentals in Lincolnshire, and from there, discovered the Tattershall Lakes Country Park, which is what British people call a family caravan resort.** We chose a large, dog-friendly caravan (sleeps eight!) in a resort that includes a pool, a splash park, kids’ activities, entertainment, a pub/bar and short drives to historic castles and cathedrals, and a large green space, which the Brits call a wold for some reason.

The drive there wasn’t too bad.  It was quick-ish, about three hours including a stop for lunch.  The kids had snacks and books (and tablets), and I even got to catch up on some reading while Chris drove the long stretch going towards, simply, The North.

We got there, checked in (they had the package and keys ready for us, which surprised Chris to no end, oh he of little faith), and pulled up to our caravan. It was not in an ideal location for aesthetics or noise, as it was the first one back from the road (they were lined up in rows), but it was close to the pool, activities, and playgrounds, so that was fine.

The Eurocamp caravan we went to in October was cheap, reasonably nice for the kids, dog and I, and it was fine.  Just fine.  During the trip, I had twinges of “Chris would hate this” but I put those aside, because I was pretty sick, and he wasn’t there anyway.

You know how you can think your house is neat and organized, but then you invite someone over and you suddenly see every room from their perspective and realize that you are living with so much clutter, and perhaps what you see as “great” or even “perfectly fine” looks, well, not as good?

The caravan was a good size, reasonably clean, and reasonably priced.  That is all.

We knew that RAF Coningsby was close by, and that we’d probably get to see some cool planes.  Well.  So. Many. Planes.  Taking off and landing right beside us, it seemed.  Some older ones (possibly spitfires?) and some fancy new ones (typhoons, Chris said).  They did loop de loops!  They did barrel rolls!  They did that thing where they zoom straight up then shoot straight down and pull out at the last second!  They did a lot of low-altitude flying.  It was amazing, and loud.

To bed, perchance to sleep

At bedtime, we tucked the kids in, and went to sit down with a glass of wine.  It was starting to get really dark, and … ROAR.  The sound of a plane doing low-altitude flying made it impossible to talk or hear anything.  ROAR again.  That was probably a barrel roll in the dark. (Do they do barrel rolls in the dark?)  Fis looked at me as if to say, well, you can imagine what he looked like.  I picked up my phone and quickly googled “do planes fly at night at Tattershall Lakes”.

Yes, yes they do.  There was a very cranky TripAdvisor review to that effect, and the resort’s response was that you can check the RAF schedule online, because it was public, etc.  So I did.  Hey, did you know that only four times a year, RAF Coningsby holds a week of night training, from one hour after sunset to one hour before sunrise?  Imagine Fis’ face now.

Lesson one:  air shows are fun during the day.

The kids, somehow, slept pretty well despite the planes.  Unfortunately, however, our caravan next-door neighbours did not, and stayed up until 3 am, partying.

The next morning, the kids got up at…I don’t know, I stayed in bed…made themselves cereal, and took the dog for a walk around the trailer park. So, by the time I got up, they were happily seated in front of the TV, having discovered the magic of being unsupervised. Baby Daddy is not appropriate viewing for a 6 year old.  Also, it’s now their favourite show.  Back to Chris’ face.

Out and about in Tattershall and Coningsby

We took a short walk over to Tattershall Castle, no more than ten minutes away, and four of us enjoyed the walk.  Vaughn complained that it was “too far”. Then, inside the huge, mind-blowing, somehow built-by-hand-800-years-ago, yet still-magnificent building, he decided that it was terrible because it was “dusty” and “probably dangerous”. It is possible that he was not flung from the tower because he refused to get anywhere near the edge, because he also decreed the safety barriers “not safe enough.”

Afterwards, we walked for another 20 minutes into the town (because we missed turnoff into the grocery store) (and boy was he cranky), had sandwiches from a nice little bakery chain then swung by what the kids declare to be the Best Candy Store Ever and gave them Type III Diabetes.

Lesson three: You already knew this, but nothing can’t be fixed with candy.

Lincoln was a forty-minute drive away, so we bundled up Ziggy and went to this beautiful medieval city that has charm, character, steep hills and wonderful, reasonable, not-London prices for lunch at a lovely pub,  Ziggy came with us up Steep Hill, and the kids and Chris were interviewed on BBC about how steep they thought it was. They even made it onto the local evening news, which we caught later, back at the caravan.

The Cathedral and Castle were magnificent.  I can’t even describe how spectacular and amazing some of these old buildings are.  The concept of someone having placed every stone, carved every figurine and gargoyle, all by hand hundreds of years ago… it just really puts everything into perspective, such as “I have no talent and have wasted my life”.  Also, it bears questioning about the truth behind separation of church and state, as they are literally a three-minute walk apart.

Anyhoo, the kids had a great time exploring both, but slightly preferred the castle, as there was an Alice in Wonderland-themed trail to follow which ended with chocolate. See lesson three.

The rest of the stay

The family resort was clean and full of families and their dogs.  They offer lots of activities for the kids, but unlike our Eurocamp experience (which had all activities included), there was an additional charge (between £8 and 12) for each, so we let the kids each choose only the one that they wanted most.  Vaughn chose laser tag, Ailsa chose the high ropes, and Tamsin chose zorbing, which we mistook for the water zorbing, so she sort of got two activities for the price of one.  We had to prebook, and they filled up quickly, but they were all happy with their choices.  They spent a lot of the rest of the time playing at two of the park playgrounds with other kids – just what I wanted.

The onsite restaurant and pub had London prices (not cool), but offered free entertainment for the kids and grownups alike every evening, from dance parties before dinner to on-stage game-show-type activities, to bingo.  We even saw a Little Mix tribute band (who have three new star-struck fans).

The pool was ok (not great, but ok), but required us to book a (free) time slot ahead of time, and the steam room and sauna were not as clean as they could be.  The brand new splash zone (also free, no booking was required) was absolutely incredible and beautiful and clean the first time — the kids ran and screamed and splashed for well over an hour — but there was something wrong with the temperature control when we went back another day, and they were cold and miserable for the fifteen minutes they could stand it.

As well, for a very dog-friendly place, there was nowhere to exercise Ziggy off-lead, which wasn’t great and left him a bit anxious.  A fenced-in area for the dogs to play would certainly be an asset to the park.

Overall, it was clean and well worth what we paid, which was £382 for five days, but maybe not, when we added in the extra costs for activities or the exorbitant prices for food and drink.

Lesson five: you get what you pay for.

Holidays are always a great idea until the last day, when you have to come home and everyone’s upset about it. We managed to pack up fairly quickly (the booking agent said to “do nothing — just lock the door and walk away”, but we did the dishes and swept anyway) and took a detour to an exotic animal sanctuary and another nice pub on the way home.

Would we go back?  Probably not (I think we’ve now “done” Lincoln), but I don’t regret going.

Would I recommend it to other families?  Yes. It’s a very reasonable price, and if have your expectations managed (it is a caravan park) and you are ready to pay for the extras, there is so much to do. But check the night flying schedule ahead of time.

* to be filed under “It sounded like a good idea at the time”. Like all travels with Fis.
** I call it a trailer park.