Following on the Easter Candy post, I thought I’d break down our annual Easter festivities for those that want to live vicariously through me the morbidly curious.

Every spring, we try to recreate the magic of Christianity by channelling a giant, mythical bunny that breaks into our house and leaves behind chocolate for all children great and small, without even requiring good behaviour.  (This was a huge oversight from Marketing, btw.)

Easter of Years Past

Easter used to be a… if not simpler, then healthier process in our home. On Easter Eve, I sit down with a giant box of reusable plastic eggs (the kind that are hollow and pop apart) and put some Corn Pops in some, and Froot Loops in others, and maybe two or three filled with a few Smarties or jelly beans.  On Easter morning, the children wander through the house, so very excited to find these filled eggs on windowsills and bookshelves.  They dump the contents into their little baskets, munching away happily — because Froot Loops!!! — and the plastic eggs quietly disappear over the next few days.

Of course, we’d tell the kids the Bible story, too, but as they get older, the questions got so much harder to answer. A few years ago, I bought a copy of Jesus Christ Superstar, which, although it’s amazing and wonderful (oh, his voice!), brings up even more questions that I am utterly ill-equipped to answer.

The traditional foods of Easter

We do a simple breakfast (hardboiled eggs that we paint then place in egg cups, with hot cross buns.  Then Chef Encraque prepares a feast resplendent with ham and potatoes, while I prepare our Easter salad.

Enough of that.  Back to the candy.

Over the years, my large assistant man-Bunny has tried to help out by acquiring the egg fillings.  Always Froot Loops, of course, but more recently, more chocolate and more candies.  And last year, it was only chocolate:  Eggies, M&Ms, chocolate eggs… You know that I’d have to be fairly desperate if I begged for jelly beans to add “balance” to Easter. 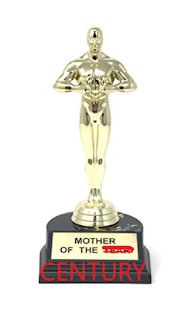 Another year, not long enough ago, Chris was away.  I was hard at work filling the eggs, but because of the Eggstreme Eggcitement of Easter Eve, the Vaughnster, who was probably 7 at the time, couldn’t sleep.  He kept coming down the stairs in a panic every 15 minutes or so and telling me to go to bed, because if I didn’t, the Bunny wouldn’t come.  Each time I had to stop what I was doing and hide the evidence.

This started at 7:35, and continued until 11 pm, with increasing degrees of hysteria on both sides.

It is to my everlasting credit that I didn’t break down and scream back at the angry, frantic, sobbing kid, “The Easter Bunny can’t come yet.  And if I go to bed, he won’t come at all, BECAUSE I AM THE F@#$%ING EASTER BUNNY!”

In fact, I dedicate this “Mother of the Century” award to that superhuman restraint.*

(Also, it may be time to sit the now-ten-year-old down and give him some hard truths about giant rabbits.)

But anyway, a few weeks ago, the whole family was out together at Costco, stocking up on canned goods and bottled water in preparation for the inevitable post-Brexit apocalypse. (kaff) And then we saw them:  giant Cadbury eggs.  Giant Cadbury Fruit & Nut eggs.  The top of the Costco warehouse opened up, a beam of light shone on the display, and a choir started singing somewhere.

Right.  We obviously couldn’t buy one, because the kids were with us, and it would be tantamount to announcing that we had lied to them about the Easter Bunny for their whole lives…which would probably open up a giant can of worms that contains not only canned worms but Santa Claus and the Tooth Fairy.  And tears and therapy.

So I said I’d go back and buy him one another day.

So, I texted him, said that I saw these eggs, but that I wouldn’t, in good conscience, spend $75 on Easter eggs.

He told me to do it anyway.  This is the logic of Fis.

I said, no, and stuck by it.  But, I bought him his £7.99 ($12!) Easter egg, and drove over to IKEA for meatballs, because I have to survive a(nother) two-week school break starting tomorrow. For some reason, I reached for meatballs instead of All The Wine.  (This will change as the week progresses, of course.)

In the food section, I found not only the meatballs and “gravy”, but lingonberry jam (as one does), and those flat-pack chocolate bunnies!

I didn’t have to think.  They were reasonably priced and super fun.  So, I picked up one for each Huffling, and hopped happily out of the store, secure in the knowledge that I could serve very-easy dinners to applause and acclaim, AND put off having to tell one of the kids that they wouldn’t get to go to university because I overspent on Easter chocolate.

Now all I have left to do is pick up some Froot Loops.  And jelly beans. And Creme Eggs.  And Eggies.

* but honestly, it was an honour just to be nominated.

** I was with a friend from Texas, who asked if we had Kinder Surprise in Canada, because they’re still banned in the US.  They’re considered too dangerous, because a kid once ate the toy inside and choked.  I responded with, “But you all have guns!”  We laughed and laughed.