(Stevie Nicks, I’m talking to you!

(Readers, play this clip in the background.)

It’s been ten years since we first met this kid, and he’s much bigger now.

He is almost — almost — as tall as I am, and that’s no good. His hair still sticks up, and his smile still melts hearts. He is as challenging as he is super-smart, confident, funny and articulate. He loves Lego, music (currently into Twenty-One Pilots) and books. He’s a good swimmer, is working towards his brown belt in Mo-Gei-Do, and sometimes can be persuaded to run. When it really, really matters, he is the kindest boy in the world. At all other times, he is a ten-year-old boy, especially when it comes to his sisters, for whom he has little patience.  Oh yes, and video games: he loves video games more than everything and everyone else in the world put together.

We celebrated his actual day with dinner out, and cupcakes at home. 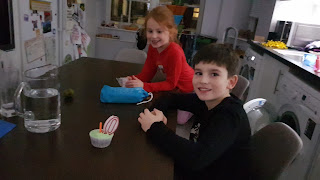 Because he’s ten, and smarter than us, he convinced us that he’s old enough to light his own candle. I am proud of many things in my life, and one is that I managed to catch this magic on video:
A week later, he invited his best friends from school to an escape room adventure.  They were locked in with Chris until they solved the puzzle. All escaped with their lives, but just barely.

V had asked for a Lego cake, so we used the Lego minifigure mold we picked up in Denmark…but how should I decorate it?

Cheers, little dude.  Keep it up!