Spoiler Alert:  In most alternate universes, I don’t survive the week in Normandy 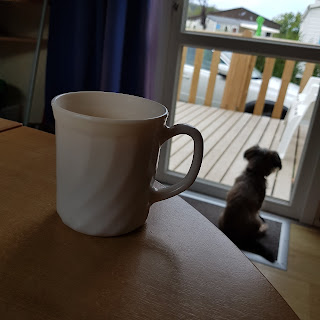 In the wonderful, inexplicable system that is international-schooling-based-on-the-French-curriculum (and thus full of je ne sais quoi), the children have two weeks off every five weeks or so.  My French friends inform me that, in proper French schools, they also get off at 1:30 every Wednesday, for no good reason other than to ensure that mothers can’t work outside of the home, or something, so I suppose we can consider ourselves lucky.

So, with October half-term looming, Fis announced that he was going to Canada for a week, abandoning me with my own children.  Again.

“Fine,” I retaliated.*  “I will take the Hufflings to Fraunce.  It will be lovely, it will be educational, and it will be restful.”

I had heard wonderful things about Eurocamps from another friend.  They have children’s activities!  I could relax and drink wine and the children would make friends and do their own thing, safely!  I could bring the dog!  They were reasonably-priced!  And not just reasonably-priced for London, but actually reasonably-priced – for 6 nights, it cost us £330, including the ferry to Calais.  (Using the October half-term discount of 50%, plus the £25 off for being a “Single Parent”).   So, we booked.

AND THEN I checked the dog’s passport, which the Unnecessary and Expensive Heathrow Vet had apparently filled out incorrectly last year.  This, of course, was two days before we were supposed to leave.  Panic, panic, wait, it’s ok.  For only £67, it was corrected, and we were good to go!

Chris left for the airport early Sunday morning.  About four seconds after the front door shut behind him, I felt chills and aches.  I had the flu, and a day and a half to recover with three kids underfoot and packing to do.  Because I am a genius, I booked a babysitter for three hours on the Monday morning.  It was a hard decision:  I could either use this precious time to go for a run, do necessary errands, or take a 3-hour nap to try to get healthy.  Lucky for me, I didn’t have to decide; the babysitter didn’t show up (she overslept by four hours), and I got to do everything with three kids in tow and a good’n’high fever.**  The last stop of the day was to buy euros, which we left until just after the “euro desk” at the bank closed.  *cuss word*

We left at 9 am on Tuesday morning, only 30 minutes past when I wanted to.  If we maintained the speed limit, and didn’t stop, we could still make the ferry with four minutes to spare!  We drove towards Dover, making up enough time on the highway to be able to afford a quick break to fill up the station wagon with good British petrol… which was lucky, because the receipt had the address of the service station on it…which I needed when I had to call a garage to fix our flat crazily exploded tire less than three minutes later.

I went total Helpless Female when I saw it.  We were stranded on the side of a highway, we didn’t have roadside assistance (I called Chris and woke him up to ask – it was only 6 am in Ottawa), and I knew I couldn’t drive the rest of the way on our donut… even if I knew how to put it on, which, being a Helpless Female, I didn’t.  But! £105 later, the tire was replaced, and it turns out that I had tricked my brain into thinking we were on an earlier ferry… we technically could still have made it, but I decided to avoid even more stress (still running a high fever) and the wonderful Eurocamp call centre rebooked it to an hour later, leaving us time to buy our euros in Dover.

The ferry was great.  We had a beautiful view of the white cliffs as we pulled away from the pier, a full cafeteria (more tea for me), and a play area for the kids with Scooby Doo videos playing in alternating English and French.  I curled up with a tea and a book.  We rolled off in Calais, and immediately found ourselves back at the ferry port.  And again.  The GPS was being a real jerk.  We pulled over, I applied weird little stickers to our headlights, as per weird French law, and we… ended up back at the port again.

Finally, though, we were off towards Normandy.  The roads were fast (130 km/h), the tolls were high (it felt like I had to pay 8.30 Euros every 10 minutes, but then again, high fever), and a little over three hours later (11 hours of travel), we finally pulled up to the Eurocamp.  It was dark.  My skin hurt.  The reception desk had closed 20 minutes earlier.  Over the long, long day, I had slowly developed a hacking cough that doubled me over.  A security guard showed us where to go, gave us our key, and we checked into our little caravan, which had two bedrooms, one with a double bed, and the other with bunk beds and a third bed.  Perfect!  Once I sent a text to the handyman to ask for heat, it was good.

It was late, but we were starving, of course, and the restaurant was supposed to be open, but wasn’t, because of quiz night, which the staff seemed to feel was a reasonable and complete explanation.  After I started crying (see also, Helpless Female), however, a nice man made us a pizza, the kids drank lemonade***, and I impressed everyone by naming Madonna’s Holiday with just one note.  I tucked the kids in, then fell into bed myself, still shivering and coughing and feverish, and Dr. Ziggy jumped up to watch over me in the night.

The next few days were a blur – I’d get up, feed the kids and walk them and the dog over to the Kids’ Club cabin, where they met new friends and painted, sculpted, played cards, played football, and did archery and climbing and something called “photo rallye”.  I sat on the steps with Ziggy and a mug of tea and shivered and coughed deep, wasting coughs.  The parents I met were amazed that I had “come on holiday without my husband”, which seemed odd, but I was so sick, so maybe they were referring to that.  For two of the nights, I wasn’t sure that I’d wake up the next morning, and left notes for the kids beside my phone, telling them how to call Daddy, and that I loved them.  Looking back, it seems a bit melodramatic, but I have literally never been that sick before, and definitely never that sick, fully responsible for the kids in a foreign country with nobody I know and no way to get home but to drive all that way again.  I felt terrible, and even more terrible that I had driven so far when I probably shouldn’t have been even operating a mechanical pencil.

In our (feverish) haste to leave London, I had left a bag of peanut butter, salt, pepper and olive oil in our kitchen back at the flat, so I left the kids to one activity and drove into town to pick up some more groceries – easy stuff like soup, fish sticks and oven fries, but rounded it out with nutella, veggies (frozen ratatouille!  amazing!) and barbecue-able meats like sausages, chicken legs and hamburgers, should I feel well enough to try to cook outside.  The wine was ridiculously cheap, but I was feeling too sick to even buy any (imagine).

I was too miserable to barbecue for the first three days, then it was too windy to light on the fourth.
By the Saturday, though, I was feeling slightly better, at least well enough to feel guilty that we had come all this way and hadn’t yet left the campsite for a museum or a visit to the beaches. 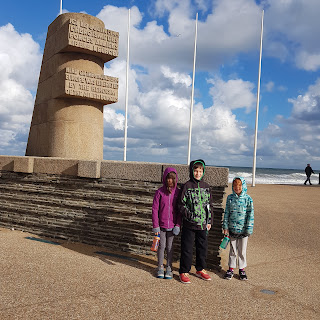 I chose Juno Beach (of course), an hour’s drive away on the coldest, windiest day of our holiday.  The kids were cold, but I tried to explain to them why it was so important that we came.  We saw two monuments and Canada House, and felt the weight and sorrow of so many young men lost as we walked down the beautiful, deserted beach. 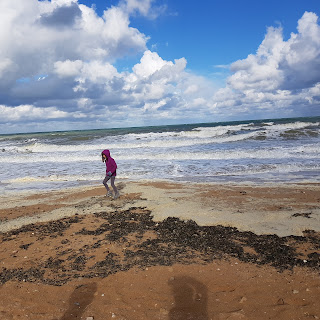 We warmed up and fortified ourselves with crepes and hot chocolate then headed to the Juno Beach Centre, a Canadian museum designed and staffed by Canadians.  It was incredible, and very much worth the visit.  We went into German bunkers, played with interactive exhibits, and the kids filled out a trail map of their visit.

Again after dark, we got back to our caravan, ate hamburgers (barbecue-in-the-rain success!) and got done up for the Halloween party that night.

The Sunday was a bit better.  There were Kids’ Club activities at 10 am that the kids went to without me, and in the afternoon, when they did archery, I joined a Zumba class, pausing to cough now and then on the down beat.  I texted Chris and told him that I would be ok to drive home the next day.

We were up and out only 60 minutes late the next morning, again pushing the timing close on the drive back to the ferry port (the GPS knew the way), but pealed in with about five minutes to spare.  We passed the French checkpoint… then British… home was just over the water… then the agent at the ferry checkpoint told us that Ziggy’s passport wasn’t valid.

We couldn’t travel back to Britain for the next 24 hours at least.

Over the wails and howls of anger and sorrow in the back seat, the poor man was able to give me the name of a vet close by (35 euros), who in turn gave me the name of a cheap, dog-friendly hotel close by (68 euros).  We discovered that it was next to a McDonald’s, which cheered the peanut gallery up considerably.

So, on the 7th day of our six-day vacation, I was still feverish and coughing, but we had McDonald’s for breakfast, swung by a wine warehouse for a case (or so) of Super Cheap Good Wine, and drove back to the ferry port with an hour to spare.  This time, they let us on, no problem.  I had a nap while the kids played watched le Scooby Doo, and we drove back to London with no further mishap.

All in all, although it could have been (vastly) improved by Chris being with us and me not being near death, the holiday was a success, and still (somewhat) reasonably-priced.****  If I had had to take care of the kids and dog in our tiny third-floor London flat by myself, it would have been terrible, and probably filled with screen time, which the kids might have loved, but I’d hate.  As it was, they were outside, running and playing, practicing their French, and meeting new friends.

I came back skinny and weak, still coughing, but with super-defined abs (thanks, Hackercise!(tm)), and this morning, after the kids got on the school bus and Ziggy got his walk, I fell back into bed and slept for two hours.

We will totally do this again.

* after, of course, pushing him out of the way, racing to the computer to check for flights to Ottawa, and realizing that they were not only very expensive, but, as my parents were cruising AGAIN, we wouldn’t have anywhere to stay.

** and nary a cowbell in sight.

*** “lemonade” in Europe is not lemonade.  It’s Sprite.  They freely admit this, but still call it lemonade.

**** for those following along at home, the final price of “unexpected issues” with the dog and the car (and not including food, wine warehouse and petrol) was approximately £650, only about £320 more than the planned price of the holiday.  Still a win.