And by “Billund”, I mean, literally, “just Legoland”.

Astute readers (the subset who know about both Legoland and geography) might point out that there is, in fact, a Legoland in Windsor.  I knew this, but didn’t really know where Windsor was, and assumed a four-hour drive or something.

I just looked it up, and Google maps just showed me that it’s 50 minutes away by car.

And now I feel shame.

Because we woke up at 4am on Saturday, took a car hire to Stansted Airport, which is an hour and 12 minutes away by car.  That’s right, we paid someone to drive us 22 minutes further away than the local, less-than-an-hour-away Legoland at an ungodly hour of the morning to go to an airport where we would board a plane that sat on the tarmac for 45 minutes, to fly for an hour and a half to an entirely different country, take a taxi to the hotel, and to start walking around Danish Legoland by about 11 am.*

Having never been to the Windsor Legoland, I can only assume that they are similar parks, but the one we went to was a great deal more Danish.  The weather was fairly miserable, cold and misty-then-rainy, but we were with another family, good friends whose kids are close in age and energy level (sorry, Denmark!) to ours.  For two great days, we went on rides, marvelled at giant, intricate Lego builds, and had a wonderful time. 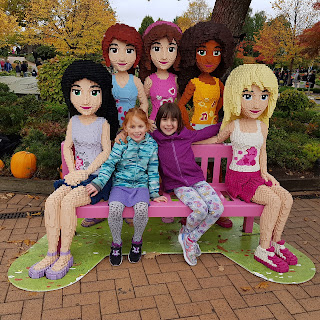 The Legoland hotel was incredible – bins of Lego everywhere (so the kids were always building (guns) and happy), and our room had a Lego kingdom theme – very cool.  The restaurants and buffets were tasty but extremely expensive (for perspective, this assessment is from someone who flew to Denmark instead of driving 50 minutes, so imagine), but we consoled ourselves by surreptitiously putting snacks-for-later into the baggies I carried in my purse.  Classy.

Words I learned in Danish:  tak (meaning thank you), and toiletter (meaning toilet).  They don’t seem to have a “please” — which makes me very uncomfortable — and I kept forgetting how to say sorry/excuse me (undskyld) while I was there.  (But now that it’s too late, my mnemonic is that unskilled me can’t remember how to say undskyld.)  (Clever, but too late.)  I also learned that the Lego you buy at Legoland is even more expensive than if you were to buy it at the airport Lego store, which seems very wrong and against the natural order of things, somehow.

We were home again by 2:30 on Monday afternoon.  All in all, it was quite the experience, and reminded us again that everything here is just so … close … that “foreign” countries (not that foreign, really – I hear that there’s a similar place less than an hour from here… kaff) are within our reach, and that we’re very lucky to be able to hop on a plane for a weekend in Denmark, even if this trip (and necessary souvenirs) mean that less of our children will be going to university now!

* In my defence, I didn’t know any of this geography until just now, so I can only blame Fis, because even I would say that it was a ridiculous thing to do, had I known, and he is quite proud of both his knowledge of geography and of his inherent cheapskatery.  True, as a responsible adult, I probably should have looked into this sooner to see what, exactly, we had agreed to do, because looking back, it was a shockingly irresponsible use of our savings.

But, did we enjoy it?