In the interest of taking as much advantage of our next three years’ proximity to many, many other countries (instead of just the one), we have been gadding about quite a bit.  This will slow down soon, because I’m pretty sure we have now visited every country in Europe (really, how many could there be?), and also we “may” have to sell one or more of our children to start financing these trips.

In February, for (yet another) school break, we had driven to Pettneu, Austria (via France and Switzerland – which totally counts as 3 countries, right?), then Chris and I flew to Nice (France again, but with more actual Frenching… no, that’s not right…) in April.  So, when the opportunity came up to rent a nice little condo in Trogir, I was the first to say, “Never heard of it.  Where is it?”

It doesn’t matter where it is.  Because it’s so beautiful.  Or would have been if it wasn’t so freaking hot, but since it was only a short 7-minute stagger down the mountain to the clear turquoise sea, we managed.  The walk back up the hill was much longer and harder, of course, but we had air conditioning and Croatian wine* to look forward to!

Trogir is not a well-kept secret, as evidenced by the swarms of tourists and the many, many giant yachts moored all around.  I firmly believe that said yachts have had a troubling effect on the local economy, in that a meal for the five of us regularly cost us the same as a meal out in London, something that we try to avoid having.  But!  Despite that, we did ok by keeping a stock of groceries and cereal in the flat, and trying to always have water bottles and snacks in a backpack.

What did we do?

Everything and nothing.  It’s very touristy, but with the beach at the bottom of the hill (and a fancier one over the hill), we spent a lot of time lolling about by the sea.  It took me only 5 minutes before I demanded that we shell out the equivalent of $10 for a beach umbrella rental, because, well, ginger, but the kids played like splashy ducks in their sun suits and hats (the only kids on the beach covered up for sun safety)(also the whitest), and we reapplied sunscreen often, and nobody got a burn, not even me!!!  Just for that, the vacation was a success.  When it got too hot, or when one of them needed rescuing,** we joined them in the pleasantly cold, clear aqua water till we cooled down enough to feel human again, and it was just really nice.

Beach days aside, there was a huge market a short walk away, with food and gelato everywhere.  (Daily ice cream is important when it’s that hot.)  I found some super-cute vacation dresses for the girls, but my efforts to haggle the price down were thwarted by Vaughn suddenly pitching forward and throwing up a LOT, right in front of her stall.  For the not-low-enough price of 90 kuna, we apologized profusely, took the dresses, helped the poor vendor mop up, and dashed back to the condo so Vaughn could rest in the lovely, lovely air-conditioning.  (And, full disclosure, I was feeling barfy myself…Tamsin had vomited copiously the night before we left, and we each got it in turn.)

Our host, who lived above our apartment, took us out in his boat the next day (we had both recovered), and we spent a day on his little boat, going around islands and swimming in coves and lagoons whenever he stopped.  The water was so bright blue and clear, and it looked about 3 feet deep, but he told us that it was 6 metres or more.  The kids fell in love with snorkelling and saw lots of fish (that’s when I got out of the water), and the salt water buoyancy really improved their confidence to swim away from the boat. 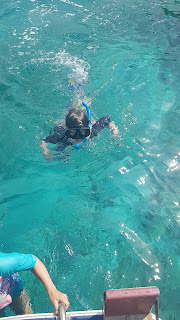 We took a day trip to Split, as well, and marvelled at the oldness of the old city.  We wandered around Diocletian’s Palace and saw ancient Roman monuments that were humbling and beautiful and mind-blowing and super cool, despite it being punishingly hot.  In short, I don’t have the right words to describe its amazingness, and also, heatstroke.

As we drove back to the airport, our host told us that we were leaving just in time:  a heat wave was on its way.  “Isn’t this a heat wave?” I asked.  “No,” he laughed.  “This is just summer.  Next week is going to be really hot.”  Luckily, we were headed for home, with a short trip to Edmonton and Red Deer first…

* Note:  Croatian wine isn’t a thing.  Do not drink it. ‘Tis far better to drink Pipi.  Or peepee, really.

** This happened far too often.  At least twice a day, I got to sprint to the water and swim out to where one of my little idiots was drifting away on the current, then got to swim them back against the current.  I counted it as cardio (and impressed the kids) so I didn’t mind too much.

1 thought on “Our Croatian Vacation (What a Sensation!)”