For Vaughn’s 8th birthday, a year and a half ago, he had asked for a sleepover party with his four best friends from school (one of which was a girl!).  “How bad could it be?” we thought, and decided to go for it.   We decided to take four extra kids to a hockey game, then back to our place for pizza and cake, followed by a movie and a good night’s sleep.

Well, that was the plan, anyway.  The girl couldn’t come (which was probably a sign of good parenting in her family), and one of the boys could come to the game, but wasn’t ready for a sleepover (again, great call, other parents!).  And of course, we didn’t really think through how to get three extra kids into our station wagon to go to the game and back.  So, we called my parents.  For the low price of hockey tickets, snacks, and parking, they agreed to shuttle the boys in their minivan, while we chauffeured our girls there.  Mom and Dad sat at the end of the row and tried to ignore the fiasco of boys free from parental oversight, while Chris and I panicked, fetched snacks, cleaned up spills, accompanied bathroom trips, corrected and tried to control seven children.  Thanks, in part, to the loud, raucous venue, it went well.  In hindsight.  The pizza was good, the cake was devoured, the movie was enjoyed (mostly – one kid decided that he didn’t want to watch it), and sleep eventually came.

So, a few weeks ago, another child in our family turned eight.  Of course we knew it would happen one day (see also, We think we’re so smart), but it felt a bit sudden.  The birthday parties we’ve been to lately have been giant, invite-your-entire-grade events, so I foolishly snuck in a suggestion that I thought was self-preserving:  how about a sleepover with four friends?

Ailsa leapt at the opportunity, and Chris and I relaxed.  No planning necessary.  No booking, no organizing, really.  Half-term was two weeks before it, and we had more than enough time to prepare.  Her actual birthday, on a Sunday, saw us celebrate with a breakfast out, her attendance at another child’s party, and cupcakes which she made and iced to share with her class the next day.  We still had a week till the party, and everything was cool.

On Monday afternoon, she came home from school with an empty cupcake carrier, a soupcon of green icing around her mouth, a stomachache and a fever.  I kept her home on Tuesday, and she slept most of the day, except when I bundled her into the car to take Ziggy to the dog park (Tuesday is his dog park day), and bundled her into the cart at Costco to pick up staples.*  She looked better on Wednesday morning, so I was surprised (but not really) to get a call at around 11 to go pick her up from school and take her home to bed.  Thursday, she was still burning up.  She rested, but not as much, and when she woke up on Friday, still warm, I called the doctor.

Much like taking your car to the mechanic, nothing cures a Huffling faster than looking at a doctor.  Dr. Charming (not his real name) checked her quickly, told her she would be fine by nightfall, and then asked me to sit in the hot seat.  Apparently, I look like I’m dying.  He checked my blood pressure (excellent), asked my family history about diabetes (only the relatives who make it to 90 have it), and ordered me to book an appointment for a full round of bloodwork, which I literally just remembered now was supposed to be last Monday.  Will have to rebook.  Whoops. 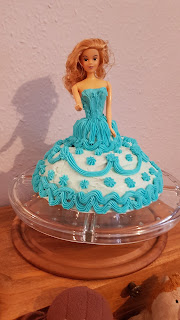 Saturday morning, we kept Ailsa home from gymnastics, because we’re not THAT terrible of parents.  I also baked a princess cake, sent Chris to the store for english muffins, “pizza cheese” and icing sugar, and cobbled together four lootbags out of common household items and remnants of lootbags past.  (Hey, I hadn’t left the house in a week.)  We told all three kids that they didn’t need to have naps,** but if they did, they could stay up past 8 pm.  No pressure.

We prepared for the onslaught.

Much like the shock we experienced eight years before, when we added another beautiful-yet-screaming baby into an already-loud household, nothing could have prepared us for four extra eight-year-old girls, giggling, shouting, running, throwing things…  Chris, the sneaky little coward, had gone out for a run at 4:30, so I got to handle the first shift alone.  The Huff House Rules were repeated often in my Calm Voice:  “Do not stand or jump on the couches or beds – do so on the trampoline,” “There will be no calling of names, telling people they’re stupid, or telling them to shut up”, and my personal favourite, “Doors that are open stay open; doors that are closed stay closed.”  Despite this, girls were standing on couches, throwing sofa cushions at each other.  They shouted rude things at each other and slammed doors.  And this was all in the first 30 minutes. 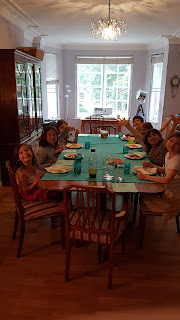 Eventually, they all calmed down, made their own mini pizzas, ate cake, watched a movie, and went to bed.

No, of course they didn’t.

By about 11 pm, I was sitting on the floor outside the spare bedroom, reading my book with a flashlight, so they’d know I was there.  It eventually worked.  They dropped off, one by one, till I could fling myself onto my own bed at 12:30, exhausted, without wine, to sleep until… oh dear lord, it’s 6:18, and they’re already up?

And yes, of course Tamsin will get a sleepover for her eighth birthday!  Because we’re idiots.

*Not actual staples, but I suppose I could get a LOT of them there, if I needed.  They have EVERYTHING!
**If not naps, then x-treme quiet time, so x-treme that not even the sound of pages turning may be heard.