Let me send out this invitation to everyone I know:  any time you’d like, you can come visit.  You can stay in our flat for free and eat our food with our kids and our dog, while Chris and I bugger off somewhere for a romantic getaway.

(This offer doesn’t apply to strangers.)  (Strangers, you’ll have to bring your own food.)

My parents came to visit at the beginning of April, just when the kids were off on Easter Break (yes!  another break! Only five weeks after the last time they had a two-week break!). This one, however, was two-and-a-half weeks long, which is, if you’ve been following along at home, one-and-a-half weeks past my breaking point.  SO, they came, they sight-saw (past tense), and allowed Chris and I a weekend-long hall pass to celebrate our anniversary.

We found a happy medium by using up a whole lot of his points to book two business-class tickets to Nice, France, for two-and-a-half days of child-free bliss, sunshine, and wine.

A Pronunciation Guide:  Without exception, when I told anyone that we were headed to Nice (n-ee-ss), they would exclaim, “Nice!” (n-eye-ss).  And then I’d say, “No, it’s actually pronounced, ‘nice'” (n-ee-ss).  Also, without exception, nobody would laugh.  Not even once.

We packed on a Wednesday morning, checked in online, sent the kids and parents off to the zoo, and took a cab to Paddington, then the Heathrow Express to Gatwick.

Just seeing if you’re still paying attention.  We took it to Heathrow, of course.

We got there early and checked our two smallish bags. (Smallish is relative.  In this case, my smallish is about the size of everyone else on the plane’s carry-on, while my carry-on was my little purse, containing my passport, wallet, and a book.  I was travelling so light that I didn’t even have a little baggie of hand cream, chapstick and mascara!  (This becomes important later, when — spoiler alert — they lose my luggage.)  Chris’ was smallish for him, which was a pretty big rolling suit bag, far too much for 2 1/2 days, but probably the lightest he’d ever packed, so, we encourage.)

We went immediately to the business class lounge, had drinks of the alcoholic variety and enough snacks to make it worthwhile, then meandered over to the duty-free shop, for the leisurely, romantic experience of testing and choosing a new perfume for me, since he has apparently never liked the perfume I’ve been wearing since 2000.  (Did I mention that this was our 11th-anniversary trip?*)  And I didn’t really like the one he’d bought me in 2010 to replace it.  We strolled up and down the aisles, and sprayed two little pieces of paper each with the scents we liked, then switched, made faces at each other’s choices (mine were too floral, his were too musky), then he glanced at his watch, panicked, and told me to “just grab something” because our flight was about to board.  So I grabbed a bottle that we had both passively liked, the first thing we smelled on the way in, and that was it.  Romance!**

We ran to the gate, stood around for a bit, and then boarded.  I’m not going to go into great detail about how we were seated in the aisle and window seats of the front section of the plane, where business class would usually be, but I think they expected that we’d see the empty seat between us as a luxurious amount of room, kind of like, oh, business class seats.  Which they were not.  But, the food was tasty, the bubbles bubbly, and it was fine. 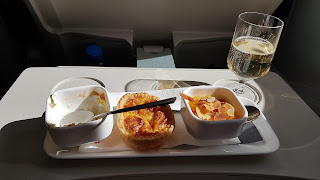 We stopped in Geneva for two hours, lounged in the lounge (more wine and snacks), then got onto another flight to Nice.  This time, we were seated across the aisle from each other in non-business seats on an almost-empty plane, but there was another tasting plate and more bubbly.  All good.

We landed just before 8pm, and made our way to the baggage claim, where literally, eight pieces of luggage appeared, snaked around once, were picked up by their owners, and… “Um, where’s your bag?” asked Chris.

The optimist and realist in me both agree that it was far better that my bag was lost than Chris’, but it still wasn’t a good thing.  Also, the computer system was down, so the baggage agent wrote everything down on a piece of paper and stapled the carbon copy to another piece of paper.  She said that when the system was running again, she’d text me my tracking number.  She also said that instead of providing those handy little kits with toothbrushes and deodorant in them, they now just reimbursed the costs.  Huh.  Nice.

We left the airport in heavy rain, around 9 pm, while I tried repeatedly to get Uber to work on my phone, since every tourist site and every recommendation we had was to avoid taxis in Nice, especially from the airport.  It wouldn’t work, over and over.  So, we took a taxi, who gave us a prix fixe (which in this case means literally price fixing – they are all in cahoots) of 40 euros, to drive us for 10 minutes.  He dropped us off about half a kilometre from the room we had found on Booking.com, and we walked the rest of the way, in the pouring rain.  Silver lining:  I didn’t have to drag a bag, sooo… Nice.

The “Room With a Vue”, which looked lovely on Booking.com, was situated right in Old Town, on top of a little cafe.  The website photos were of bright rooms, modern bathrooms and little balconies.  We had booked the studio, and were excited to drop off our bag (just one bag, now), buy me a toothbrush, and go out for dinner.  A waitress from the cafe showed us up to it, and… wow.  The “Vue” was either through a tiny window far above my eye level, or a little skylight directly over the bed, on a sharply-slanted, exposed-beam ceiling.  No balcony.  The bathtub was placed against another sharp slant, with a dormer bumped out so that you could stand upright in the very centre of the tub to use the handheld showerhead.  The kitchenette had a microwave (in the photo, not in real life) and a round table and four chairs.

We grimaced and went out to get a toothbrush, some wine, and had a lovely dinner of coq au vin and a potage de boeuf.  With wine.  We splashed back to our room and looked at it with fresh (slightly drunk) eyes.

In a romantic ideal, it was the perfect studio apartment for a starving poet.  It would be filled with dozens of cluttered bookcases and candles, and we’d drink cheap wine, and eat food with our fingers as we planned a revolution.  It’s the kind of place I would have loved in university.

I am of two minds about that skylight.  It was well-placed, in that had it not been directly over my side of the bed, I would have bumped my head on the ceiling everytime I sat up.  However, in the interest of “staying asleep” and “keeping dry”, it was not ideal, as the raging thunder and hail storms were very loud, and also, it leaked.  On me.

The next morning, we noticed a strong smell in the kitchenette, which had been apparently covered up the night before by the (suspicious) can of air freshener.  We opened a cabinet, and whah!  There was a plastic bin of vegetables-so-rotten-that-they-had-liquified, and a basket of — searching for the word – not potpourri, but aha! — “les onions pourris“.  And the wifi no longer worked.  And the roof was still leaking.

The wifi was important, as I needed to continuously check the baggage tracking app to make sure that I stopped shopping when my suitcase was found.  As it was, we waded out through torrential rain to the closest shopping area and bought new jeans (on sale!), a sweater (on sale!), two sets of socks and underthings (cheapest ones they had!), mascara (necessity, not luxury) and a pair of teenager shoes, these ones white floral and slightly too big because nobody makes shoes in my size!!!  All this while feverishly checking the app.

By the time we had lunch in a nice Nice cafe (Chris had a nicoise salad, I had a caprese salad with enough cheese to kill me), with wine, and sloshed back to the room hovel, we expected a nicer-smelling room… or a drier one… or one in which the wifi worked.

Chris went for a nice long Nice run along the beach in the downpour, while I did calisthenics in my bare feet (and his t-shirt) in our room.  I also sent a nice long suprisingly-pleasant-under-the-circumstances email to the owner of the hotel.  By the time we went out for dinner (yes, still raining), I had a phone call back – we could move to another room, the rotten onions would be cleaned up, and was I sure the wifi didn’t work?

Upon our (soggy) return to the hotel, we were full of delicious food and wine, and much cheerier.  We moved our stuff (again, still just the one bag) to another room, and it had a view!  A beautiful view (true, it was a view of an extremely rainy street), but it had a balcony, and there were no liquified vegetables in sight or in scent.  Still no wifi.

The next morning, twenty minutes before check-out, the baggage tracker suddenly indicated that my luggage had not only been found but was out for delivery!  I panicked, but it showed up with five minutes to spare.  I had already packed my small amount of laundry, perfume and new toothbrush in Chris’ bag, but I took my small suitcase, thanked the driver, and the rain stopped.  For all of our “issues”, we were treated like royalty at the cafe, where Chris enjoyed a breakfast of Elvissian proportions, and they offered to watch our bags while we walked along the beach for the last hour of our vacation. 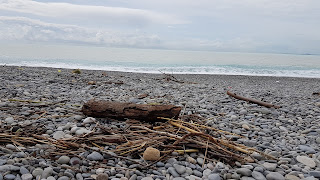 As we walked, the sun came out, and the aqua sea and brightly-painted old town were dazzling.  It was a glorious day, almost too hot within the hour.  The stones on the beach were worn smooth, and we managed to pick up some souvenirs for the kids before returning to the airport. 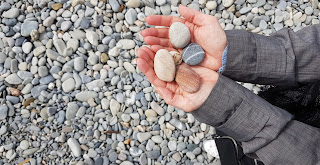 Would I go back?  If the last morning was any indication of the possibilities of Nice, then I would definitely give it another chance.  The staff, eventually, were nice to the point of ridiculousness, though whether it was because they felt bad about the rain/luggage/ruined romantic getaway/stinky-and-shack-like accommodations or because they hoped to avoid a poor review on Booking.com (I still haven’t decided what to give them yet), I really can’t tell.

Next time, however, I’m going to keep my mascara (and a pair of underwear) in my purse.

** Ironically, Romance was my forever perfume*** when I met him.  His rejection of Romance should have been a red flag.

*** I’m totally not fancy enough to pull off a “signature scent”, and a “me-smell” sounds not quite fancy enough.