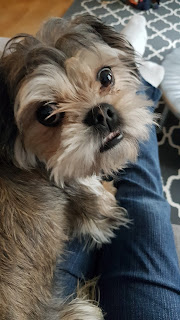 Ziggy, who has more nicknames than I have shoes, is now 18 months old, meaning that he only has 6 more months until we can no longer blame his terrible behaviour on his age, but on his personality, and — of course — his trainer.  Luckily, most people guess that he is only 4 months old, which helps a bit.

Although some days, he impresses me to bits, His Zigness still doesn’t walk very well on a leash, despite clicker training, treats, professional classes, and 3-4 training outings (with me) a day.  He has lately decided to never look at me, even when I’m holding a treat and saying, “Ziggy!”  “Look at me!”  “ZIGGY!”  “LOOK AT ME!!!”

During these times, many, many other people look at me, but he won’t.  It’s very embarrassing.  He’ll even sit down, facing away from me, pretending he can’t hear me.

He will, almost always, perform his handshake trick (“Paw!”), his jump-up-on-things-like-benches-and-walls trick (“Hup!”), and work is still progressing on “sit”, “stay”, and “stick ’em up”, the precursor to the play-dead trick (“Bang!”).

He is welcome in some pubs, coffee shops, and restaurants, as well as public transit, which is weird and great and unhygienic and often embarrassing, but it really is something that I love about England.

He will not, however, lie down quietly under my chair at the pub while I have lunch.  He will also not sit and stare at me devotedly (see above) while I have a coffee at Starbucks, unlike that lovely King Charles Spaniel that I see there often.  Zoggins paces and circles and whines and hopes with his whole body that I will drop something tasty for him.  The “do nothing” training that they assigned to us on the first day of Puppy Kindergarten, over a year ago, has never once resulted with him sitting down or lying down out of boredom or resignation.  We can point to his doggy bed (ok, ok, one of his doggie beds) and say, “mat”, and he’ll spring onto it, lie down and look at us alertly until he gets a treat, at which time he will spring back off and resume his pacing.  More work is needed, and it’s my job.

But until then… guess who has the sweetest howl ever?

He was sitting on my lap, and suddenly threw his fuzzy head back and howled.  A sound so soft and high and sad, it would break your heart.  His little mouth formed into a tiny triangle, and he howled again.  It was SUCH a sweet moment…

…said nobody else on the bus, because yes, I was holding a howling dog on a bus.

To be fair, the other dog, a gorgeous Scottie in a fetching red coat*, started it.  We boarded, I let the dogs meet by sniffing noses, then I returned to the front of the bus to keep some distance between potential loud-and-unruliness.

The Scottie desperately wanted to hang out with Ziggins, so started to whine and howl.  Zognob, in return, whined and barked, then suddenly howled sweetly.  And howled.  And howled.  Scottie kept up his racket, too, and the two of them sang a poignantly beautiful song about how they would be best friends if only they were allowed, but alas, their parents kept them apart.  (I assume.)

Luckily, the people behind us thought it was hilarious, and told us not to get off the bus, as we’d be waiting another 30 minutes till the next one came along.  Several other faces were less impressed, and when Scottie finally got off the bus, ZigZog quieted down.

If I can figure out a way to get his howl on video, I will.  Because it’s just that cute.