Disclaimer:  Unsolicited, unpaid testimonial follows.  (Don’t get me wrong — I would totally accept payment for the following, preferably in food… )

Soooo, my friend Mel, who has four kids and somehow also manages to look well-groomed and run a successful business*, sent out a post on Twitter recently. 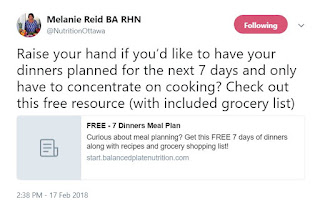 Well, to be precise, I responded with a “hand-raised” emoji. 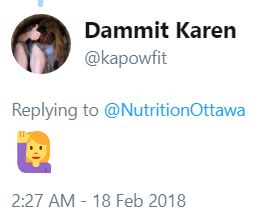 And then she responded with “Click the link, woman!”

So, because I follow directions well, and she scares me a little, I clicked the link.  I bought everything on her shopping list (except for chickpea pasta (subbed pasta), tamarind (soy sauce) and nutritional yeast (parmesan)), including salmon, which everyone who knows me knows I don’t eat because it’s “fish” and therefore “icky”.

(Chris is encouraged to eat as much seafood as he can when he travels, because a) then I don’t have to make it, and 2) I don’t ever need to be around his fishbreath.  We even have a little saying:  “Boys who eat fishes don’t get kisses.”)

The kids, of course, like fish, for the most part, especially fish and chips, which is pretty much the lowest form of the healthiest food on earth, but meh – at least I don’t have to make it.

The chili-garlic salmon and bok choy (pak choi, here) was actually good.  I was going to make something else for myself, but then figured that I should actually set an example and try a little bit, and I managed an entire serving.  I even enjoyed it, when I wasn’t thinking about how I was actually eating fish for the first time in 30+ years.

(True story:  I grew up mostly in Halifax, as a Catholic, so fish was on the menu every Friday for sure, and often other days, too.  Tartar sauce (which, I have pointed out before, is ratrat spelled backwards) made it bearable, but never good.  My mother finally gave in when I was about seven, and decided that she’d rather not waste perfectly good lobster (we’d sometimes have my own personal hell — lobster boils — in the summer) and also have to watch me try to choke it down, thus ruining the lobsterrific goodness for the rest of them.  After that, when seafood was for dinner, I was allowed to make a peanut butter sandwich.  And everyone was happy.)

It had an almost chicken-y texture, and wasn’t fishy at all.  But my brain, my god.  I kept having salmon flashbacks for the rest of the night.  Folding laundry:  I ate fish.  Watching TV:  I just burped salmon.  Despite it tasting good and being SO healthy (30-year mantra:  I wish I liked fish!  It’s SO healthy!), it was surprisingly, emotionally hard to come to terms with.

Does this mean I can no longer tell restaurants that I’m allergic? (Of course it doesn’t!)

Does this mean I have to eat fish again?  (Of course it doesn’t!)

How much smarter would I be now if I had eaten fish twice a week for the last 30 years?  (Fis can barely handle/accept my Supersmarts! (TM) as it is, so the world probably wouldn’t be able to either.  It’s totally for the best that I haven’t.)

Anyhoo, all these existential questions aside, I salute Mel, whose recipes are delicious and whose motivation and organization is inspiring.  Years ago, BK (before kids) and WOOK (with only one kid), I would sit down on Saturday nights with a glass** of wine and cookbooks, to plan the meals for the week and write my shopping list for Sunday mornings.  It was sensible, civilized, organized, and… gee, I really should start doing that again.

OR, I could just cycle the Balanced Plate recipes for a week or two more.  We also ate cast-iron steak with sweet potato fries and a garlic-rosemary mayonnaise (my new, savoury spoon food, for when I find Nutella a bit too much), a burst-tomato pasta (with chicken, because no chickpea pasta) and a slow-cooker yellow split-pea stew, which made enough that we’re having leftovers tonight.   Tomorrow will be the pork tenderloin… looking forward to it!

* In case you’re wondering, I manage neither.
** Technically true:  bottles are made of glass.
*** Just imagine how great this testimonial would be if I was actually being paid to write it!   (Mel — call me! 😉