Skip to content
We’re slowly trying to get our bodies and minds on London time.  Although we haven’t officially left our neighbourhood yet, we’ve been hoofing it all around to different (amazing) parks until we (“we”) are mentally able to handle the thought of taking the tube with three wild animals.
(Chris has been going to work since Monday, so he’s already a pro, but he has left me with three Crankipus Hufflingius Jetlaggii.  Today, I took the extra precaution of containing them (and a small furry decoy) as iconically as possible, for the greater good.)
About four blocks one way, there is a beautiful church garden/park/playground, full of nature, cool climbing equipment and really old graves.  They have an Outdoor Gym that the kids want to use every day to, and I quote, “get fitter”.  They do all the stations, and the number of reps to beat, so far, is 16.  The playground is always full of cheeky English cherubs, who sound delightful as they crow things like “Brilliant!” and “Flipping hell!”.
There is another, larger space, about a 20-minute walk in the other direction, just past a Starbucks (yay!), with running trails and fitness stations, several off-leash dog areas (Ziggy was in heaven, and made tons of friends, human and canine alike!), and another outdoor gym.  There was a personal trainer at one of the stations, and a Very Serious Strollercise group in a gazebo… I will be spending a lot of time there once the kids are safely ensconced in school.* 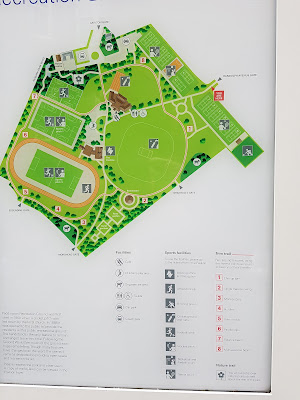 On our street, between our flat and a Starbucks (yay!), is a public library, for which we got cards yesterday.  The summer reading challenge requires that they each read six books by the end of August.  Vaughn told the librarian that he could do it by Friday, but she didn’t believe him.  Ha!  She will learn.  We popped in for a mask-making workshop after our groceries were indeed delivered (success!).  Vaughn created a gold monkey mask with giant claws.  Ailsa’s was a dog mask, with long eyelashes and a gold hat.  Tamsin’s mask was a dog wearing a mask – very meta.  Mine started out as a lion but ended up looking like David Bowie if you squint.
Regarding the groceries, it seems that doing a “full shop” is very different if you already have staples.  I bought a full load of groceries, making sure to cover off every food group and healthfully, too!  SO, last night, the Domestic Goddess made our very first home-cooked meal in our new home.  It was a traditional house-warming meal of pan-seared chicken finished off in a cream-of-chicken-and-leftover-shashuka sauce, with a hint of Laughing Cow cheese thrown in for that je ne sais quoi, served over wilted spinach, a quick tomato-and-cucumber salad (tossed with lemon juice, salt and pepper), and wee little charlotte potatoes, which, it turns out, are wee little potatoes.  I learned that 1) I apparently depend on spices and condiments — which won’t arrive for at least another two weeks — to make good food – who knew? and 2) despite having to improvise wildly and having no idea how to use the wall oven-slash-microwave, I still rocked it.  Ba-BAM!  And self-high-five, besides.

Today, however, my cold has enworsened, I’ve lost my voice, and I am barely upright (we don’t have cold medication, so I am having another glass of wine, which was also delivered yesterday morning, thank-you-very-much), so we had takeaway curry, and confirmed what we already thought:  “fairly hot” in Ottawa is child’s play compared to “fairly hot” in England.  Despite watching both of her parents and both her siblings scream in agony, then chug water and raita after a tiny mouthful, Ailsa decided to slowly chew up a green pepper from her Gosht Kaila.  Silly, silly girl.  Even before she started, I said, “That will be so hot it will make you cry.”  And Chris said, “You’ll literally burn your face off.”  Yet, like someone else we know, she decided to find out for herself.

Update:  Chris found a capsule of Tylenol Cold PM mixed in with his vitamins, which I have washed down with wine.**