Vaughn doesn’t get too much air time on this blog, lately, but he’s an amazing, interesting, complex kid.

He’s reading… not just words, but BOOKS.  He’s reading English voraciously, French daily (with a beautiful French accent).  He does his math homework incredibly quickly-yet-correctly, and easily meets any math challenge we give him, or at least has the idea of how to solve the problem.  He loves science experiments, and over the summer, spent hours on the driveway with cups of water, vinegar, baking soda, cornstarch and food colouring.  He makes tiny, detailed drawings, often of ships, tanks, weapons (sigh), but also of cats and people and Pokemons.  He is dentally advanced (or possibly just isn’t taking care of his teeth), as he’s lost 7 teeth so far – last week alone, he lost 2.  The tooth fairy is being scarily generous, and with a few more teeth out, I believe he’ll be able to buy a fairly decent used car with his earnings. 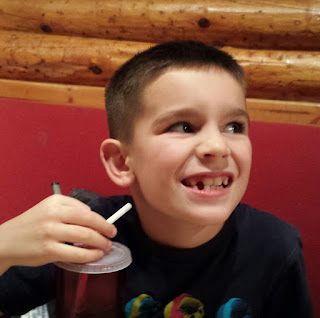 Now that he’s lost two on the same side, he has a “straw hole”.
Of the three kids, he is the most cautious around animals (well, around everything, really) but wants a dog so badly.  He’s nervous around dogs, which is why it is especially endearing that he is keeping track of all the dogs that have licked him – because it means they’ve made him part of their pack.  As of Saturday, he is now in SEVEN different dog packs.  Wow.  He has, however, since we first talked about getting a dog, refused to pick up poop.  Just a few months ago, I asked him again, and he said he would NOT.  I said, if you won’t pick up poop, then we’ll never get a dog.
He paused, considering (his pauses are great), and said, “I will pick it up, but I won’t enjoy it.”
To which I replied, “No, you also have to enjoy it.”
“NOOOOOO!” he screamed, grinning.  (He gets me.)
He is not all sunshine and roses, however – far from it.  He is sensitive about certain things, and insensitive to others (by “others” I mean “Ailsa”), and can be stubborn and angry and carry a dark cloud over his head…until you make him laugh.  He stomps up to his room in true teenage fashion for almost any reason, and is only truly happy when he is tormenting his little sisters.  In fact, his real, gleeful laugh is a clear indication that he is being a stinker to at least one of them.  He loves them (but usually will not admit it), and, with Tamsin especially he is (sometimes) very tender and kind.
But anyway, to bring us back to the cryptic post title above (has anyone figured it out yet?), his brain works in strange and brilliant ways.  With it being mid-November, dining-room table talk is revolving around Miss Tamsin’s upcoming birthday celebration…and Christmas (he’s started three lists so far).  Vaughn has also started putting thought into his own birthday, which is coming up soon (seven weeks is sort of soon).  This morning, we were eating breakfast, and he said, “Do you remember your last Christmas with just you and Daddy?  And I was in your belly?”  (This, of course, from photos and stories we’ve told him)  “My birthday is just a little bit after Christmas, so it’s like I’m Jesus’ little brother.”
(There are several flaws in his logic, but the only one of which we got into this morning was the 2000-year age gap.)