Of COURSE the kids love Halloween – they’re 50% Halloweenie, after all! 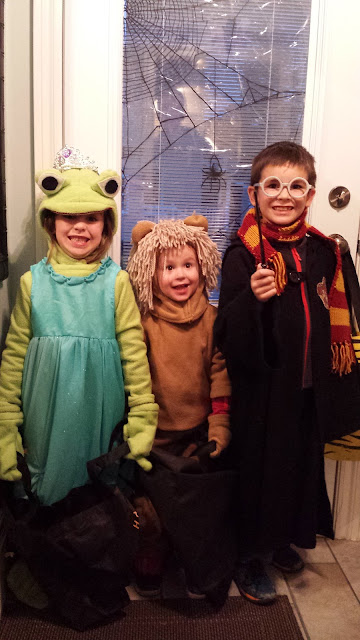 This year was no exception – the kids chose their costumes fairly early on (two of them “may” have been helped along with subtle hints, as it would be a shame to have, say, a beautiful, hand-sewn lion costume only worn by one Huffling, or a princess froggie only worn by one … um.. my niece).

Harry Potter was a given for Mr. Vaughn, as he is keenly into the 4th book, and is eagerly looking forward to watching the 3rd movie (trying to deflect that one as long as possible – they start getting scarier and scarier).  He knows quite a few spells, and I am never safe from someone sneaking up behind me and yelling “Expelliarmus!”…which inevitably makes me jump and drop whatever I’m holding… because it’s magic, duh.

I, as usual, completely missed the point of Halloween, which is apparently to dress provocatively and live out one’s illusions of sexiness.  I was a … um… sexy?… killer whale, posed here with a priest.  Note that I was not convincing enough in pushing my old nun costume on Chris, which would have entailed showing a good expanse of ankle.  I also wanted him to wear lipstick.

“You wouldn’t be dressing up like a woman,” I insisted.  “You’d be a man in a nun costume wearing lipstick, which is much funnier.” 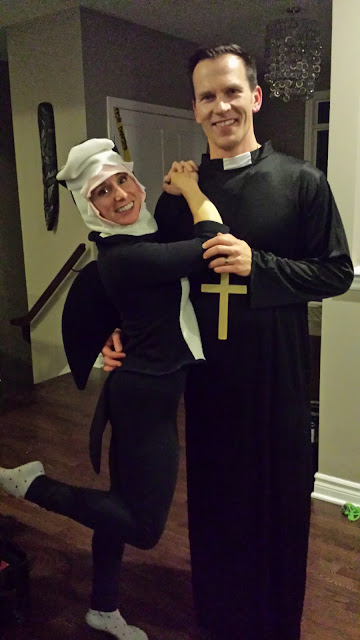 I
Because Halloween was so hectic, with trick or treating and, well, trick or treating, we waited till the day after to make our Halloween Feast!   The Domestic Goddess resurfaced quietly to impress the kids, the husband, and horrify the poor, unassuming houseguest, Uncle Rob.
First, I slayed a monster, and cut off his feet at the ankle:

THEN, I cooked his brains until they were a nice medium rare.