Skip to content
Before going into details about our incredible trip down east,* I need to try to capture the imagination and weird creativity of our Ailsa.
Ailsa comes across as a normal little girl.  True, she seems to be higher energy than anyone else on the planet, and her dulcet tones can pierce your eardrums a mile away if she’s happy, excited, upset, or, well, awake.  She bounces more than she stands still, and runs/leaps/jumps more than she walks.  She climbs and swings and… hmmm… maybe a trip to a doctor for some sedation might be in order.
Where was I?
Oh yes.  She’s also funny.  SUPER funny.
Example:  we were staying in the gorgeously-finished basement of Aaron and Cathy last week, and while the rest of us were still getting ready to head out for the day, Miss Ailsa made a friend.  She found a small collection of stuffed animals and some play food, and suddenly, she was having a tea party with a stuffed snake (as one does). 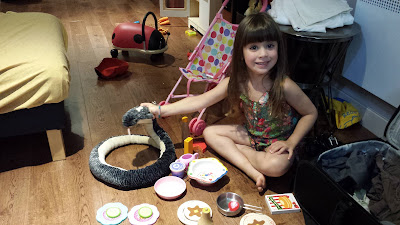 This seemed sort of odd to me, but the snake in question was a little bit fuzzy and apparently housebroken.  Being a cobra, it had the traditional U-shaped design on the back of its head, and Ailsa promptly christened it “U-U”.

It was a very nice snake, well, usually it was a pretty nice snake, but one time, when it was just a baby, it bit her on the hand!

“She promised not to do it again, though, and she hasn’t.  I love her.” 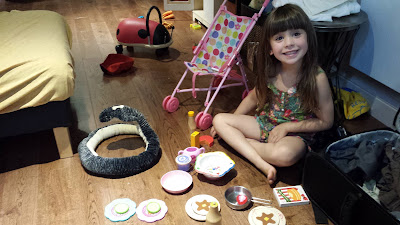 Other interesting tidbits that were revealed about this snake:  she only likes people and kitties.  At one time or another, every other animal has been mean to her.  When I questioned how they were mean, I was told that sometimes they didn’t want to play with her, and some of them made loud noises, and she didn’t like that.  Also, sometimes she bites her tongue.  I swear, Ailsa learned more about that snake in 10 minutes than she knows about me, and told us all.
If only there were a way to harness that energy and imagination into such activities as “sitting still” or “speaking with an inside voice”.

** See?  This blog is educational.  I bet you didn’t even know that snakes had bums!