Growing up in suburbia of various cities, we took Halloween for granted.  You put your costume on, started at the house next door, and ran up and down every driveway on every street in your x-block radius, complaining about the very few houses that dared be unlit and grinchy with their candy.

Trick-or-treating in our current neighbourhood is such a different experience.  On our street, only two houses give out candy… one of them is ours.  On the adjoining street, in three blocks, there were just two houses with carved pumpkins out.  We knew both families.  But the pumpkins were unlit, as the families were still out, looking for more loot.  “We’ll swing back on the way home,” I promised.  When we did, they weren’t back yet.

“Look!”  Ailsa yelled.  “A pumpkin!”  It was more than half a block away, down another street, but sure enough, there was a lit pumpkin.  A few doors down, a woman sat on her porch, out of the rain, and beckoned us over, inviting the kids to help themselves from her bowl.

“Try next door,”  she said.  “Their porch light is burned out, but they’re giving out candy, too.”

Other candy-givers, usually one of two or three at most on a street, asked for help in recruiting more trick-or-treaters.  “Tell your friends!” they’d call.  “Happy Halloween!”  A lot of them were hanging out outside.  Many of them gave great handfuls, as they knew that they’d be eating most of the candy, anyway.

One woman was standing at the bottom of her driveway, the stump of a candle sputtering merrily in a glass bowl at her feet.  She held a plastic bag, in which were dozens of little baggies of treats, each tied shut with a ribbon; she had obviously gone to a great deal of work.  She was standing there, in the light rain, hoping to share her Halloween spirit with as many little souls as she could.

I guess I could look at it and think that it’s a bit depressing.  Our neighbourhood is turning around, but it’s going to take a while, and tonight, I was out there for an hour in the rain with a very determined knight and a stalwart little princess,* successfully trick-or-treating about a dozen houses in total.  Luckily, our kids don’t know any other Halloween.**

I’ve decided to reframe this in a completely positive light:  this way, it’s so much more exciting..  The joy isn’t just in getting loads and loads of candy (which they did), or in dressing up and being someone–or something– else (which they loved), but in the hunt.  The excitement of finding a house that actually wanted to give FREE CANDY to them.  Watching their faces when they saw another little family out and about.  Sharing insider tips as to which street has a house or two that’s giving out.  And being able to take the time to really connect with the other Halloweenies.

What a wonderful, happy Halloween.

Now, if you’ll excuse, me, I have about 90 leftover fun-sized chocolate bars to hide from myself.

* the wee skunkie was at home with Grandma and Grandpa, staying dry. 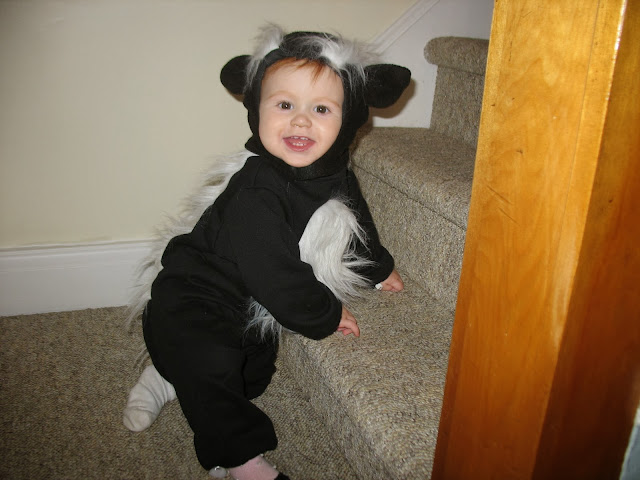 ** somehow, I don’t think Barrhaven transplants would be amused.