Skip to content
Another Halloween has come and gone, and it was fantastic.  (Of course it was!  It’s Halloween!)
The kids were very specific in their costume choices this year.  Ailsa, who fits perfectly into V’s awesome lion costume from last year, insisted on being a punkin.  I was trying to plant the seeds from February onwards, but her mind was made up.  Punkin or nuffin.  Well.
And Vaughn’s vision was to be, well, a killer whale.  Hmmm.
Ha ha ha!  Good luck, Grandma!  I said, and Mom set to work making these kids look as awesomely ridiculous as they did.  She did a great job, as usual. 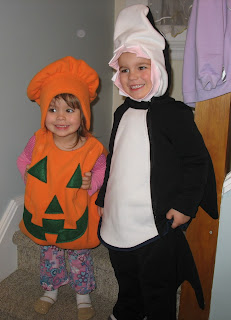 Trying on the costumes for the first time, admiring their reflections. 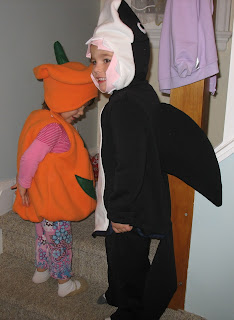 Rear view.  You can see V’s dorsal fin and tail. 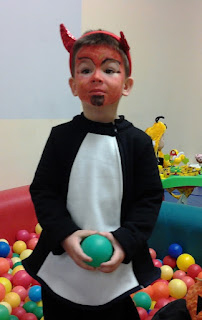 This was taken at playgroup.  They had face painting, and V wanted to wear my “ears” anyway, so, “Why not?” I thought. 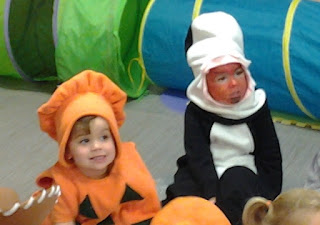 Ah.  This is “why not”.
How fun was it to explain, repeatedly, that although it looked like I intentionally dressed my son up as a victim of a killer whale attack, it really was innocent.  Gah.
I washed his face before we went trick-or-treating. 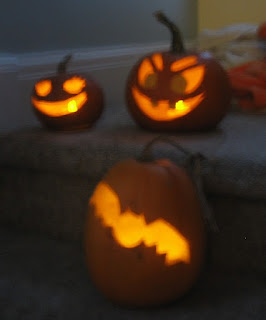 Pumpkins, clockwise from top left:  Ailsa’s design, Vaughn’s design (I was the consultant and knife-wielder), and my let’s-just-get-this-over-with design.  The fourth pumpkin was a ghost (again, quick and effective), and the fifth was handed as an empty pumpkin shell to Amanda for her decorating! 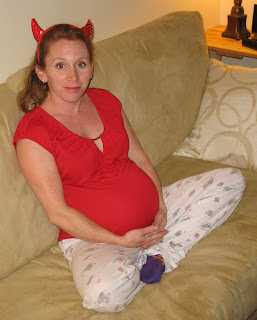 Devil or Buddha?  And here I am, large as a barge and in charge, as they say.  Later that night, I had half changed into my pjs, but thought I should get at least one photo of the belly at 36 weeks.  Am “starting” to get disgruntled that, 7 weeks after my end being at the receiving end of steroid shots and a prescription for bed rest, the baby has not yet escaped its uterine prison.  I am officially allowed to have it this evening (Mom and Dad will be back in town), however.

Can’t wait for next year!  Hopefully the next ‘lump will be as much of a h’weenie as the rest of us!