Skip to content
March Break 2012, Chris had the luck to have a conference in LA.  “You and the kids should come!” he said.
Hmm… let me think on this.  He’d be in a workshop all day, every day, with some dinners and meetings in the evenings.  I’d be using up my entire vacation allotment for the year, staying in a single hotel room with two small children of inconsistent delightfulness, pretty much by myself, unable to even watch tv after their 7:30 bedtime.  “Thanks,” I said, “but I’ll pass.”
He finally convinced me by saying that both his mom and his dad would be able to visit the kids while we were there, and… (guilt kicks in) how could I say no to that?  I finally agreed, with the explicit understanding that he’d owe me.  Big Time.  And of course, my favourite person on the planet, TP#2, had recently moved there, and maybe I’d get a half day’s escape to hang out with her…?
The night before we left, I started feeling lousy… streppy throat, fever, chills, body aches, migraine… now THAT’s the way to start a vacation!  The kids were wonderful travellers, as usual, but I was unable to appreciate it, as I was far too sick.  The week was fairly rough, health-wise, as “sleeping” in the room with the kidlets wasn’t really sleeping, V came down with a cold that required being propped up to breathe (enter body pillow/Mommy), and generally, I didn’t feel better at all for the first 6 days.  I tried to be a trooper for the kids, but I was fairly cranky to Chris, every chance I got.  (sorry, babe!)
For March in LA, I was surprised by the Canadian weather!  We left 24-degree days, and arrived to 50-degree days.  As I have no idea how this Farenheit thingy works, I just knew that it was chillier than at home, by far, and the wind was cutting.  It didn’t stop us from bundling up and exploring, though. 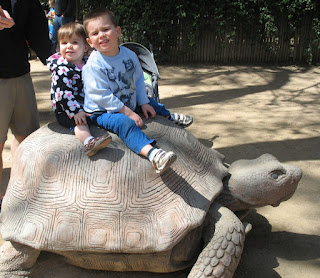 We started out small:  the local Santa Ana Zoo, which promises to always have 50 monkeys on site.  For an intro to the vacation, it was small enough to be manageable, but still interesting for our little monkeys, reasonably-priced…and 5 minutes from our hotel!
That afternoon, we caught up with Grandma and Grandpa Huff.  Chris went to a meeting, and we went on a long, ill-fated, GPS-ruined (it lies!) walk to find dinner, but were eventually saved by Grandpa’s brilliant solution:  In and Out burgers.  The day was saved! 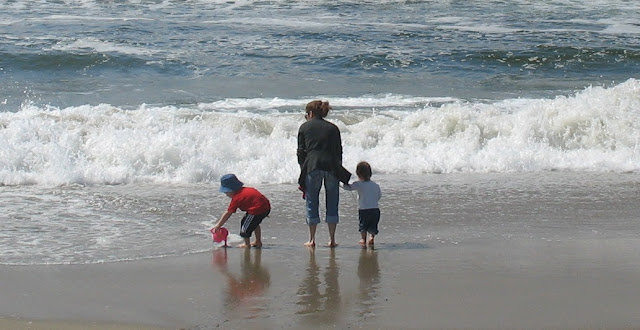 The next day, I drove for an hour and a half to meet up with them again (cursed the GPS again – it was only 15 minutes away!), and we all went to the beach; their hotel was right across from Huntington Beach.  Despite the briskness, the kids loved it!  Sand, surf and sun, and smiles all around! 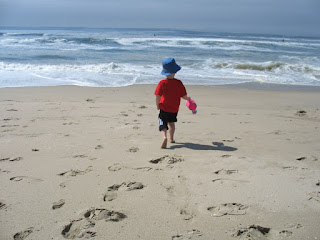 This pic made me reminisce about his last beach experience – check out the last photo from this post.  He’s gotten so big!!! 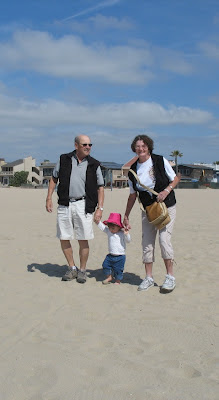 That night, we met up with Laurel and Mike for dinner – so great to see them again!  I was also able to impose on Grandma and Grandpa’s good will – the next day, I dropped them off again (hey!  it was only 15 minutes away!) and went off alone, to meet Laurel.  I started out at a Starbucks, then we drove down to the Barboa Boardwalk﻿, where we walked, lunched, met with a psychic, then sat on sand dunes to watch a pod of dolphins and some pelicans have lunch on a school of fish.  Amazing. 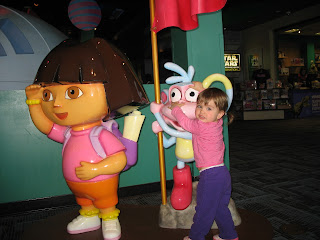 We took a day for the hotel pool and some shopping (for fleeces!  brrr!), as well as a trip to the Discovery Centre, starring Dora and Diego!  Laurel was kind enough to come along – I have no idea how I would have managed without a second set of hands (and two more sets of eyes – hey-o!).  With it being March Break, the place was lousy with daycamps. Despite the crowds, it was a really cool experience!  That night, we said goodbye to Chris’ dad and stepmom. The very next day, who should arrive but his mom and stepdad!  Grandma and Grunkle were ever-so-happy to join us for meals and a few outings.  They declined the invitation to Legoland on the Friday, but joined us for breakfast before we went.
I can’t believe I forgot my camera – we spent 3 hours in Lego heaven!  As it was the first amusement park we had ever gone to, there weren’t any tears about being too small for most of the rides.  We went on Fairy Tale Brook, which was fantastic for both of them, and Vaughn got to go to Lego Driving School, which was hysterical – he drove a car all by himself, while I offered encouragement from the sidelines.  There were a few that Vaughn could have gone on with me, but Ailsa couldn’t (and it felt wrong to strap her in and leave her in stroller parking), so we spent a lot of time looking at massive Lego reproductions and the neatest interactive musical lego fountain ever.  So cool.  Vaughn was a trooper, walking the whole time, but I started to get a bit frustrated at the end of the day, trying to find one more thing to ride, but my amazing boy said, “Can we go on the little green boats again?”  He just melts my heart.  Again, no camera.  Humph. 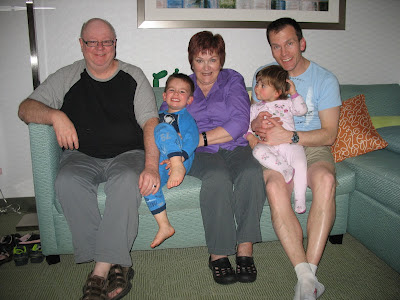 Chris, Grandma and Grunkle took the kids on Saturday, when I was released again to spend time with Laurel, this time at a spa!  Mani-pedi heaven.  I didn’t know what I was getting into, but they had the full experience, with baths, steam rooms, etc, and not being prepared, I had to go… (kaff) European.  I apologize to Laurel, again.  And to all of California. 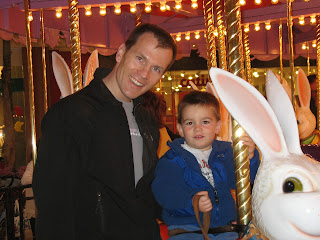 It being Easter-y, they found a bunny carousel – so much fun for everyone! 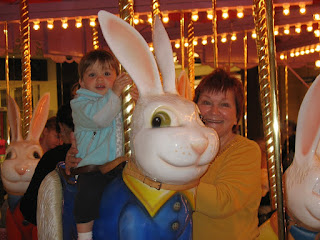 I don’t know who smiled more on that trip – Ailsa or Grandma!
She gladly watched the kids on Saturday night while we escaped again for one last outing with Laurel and Mike.
Part 2 to come – one more day left in LA – what could we possibly do to top all this?