Skip to content
So, day 8 of our “vacation”, we bit the bullet and headed to Disneyland.  I know, I know, who in their right mind would take a 1- and 3-year old to Disneyland?  Chris, however, convinced me that because we travelled on points, stayed in a hotel that his conference was paying for, and we had come SUCH a long way, how could we not?
I countered with, “it’s going to be soooo crowded”, and “they’re far too young”, followed by “it’s awfully expensive for somethng they won’t remember or understand”, also adding, “they have no idea what Disneyland is, and won’t miss out.”  But Chris insisted (and possibly reduced Vaughn’s reported age by 3 months or so, in the interest of thrift), so off we set. 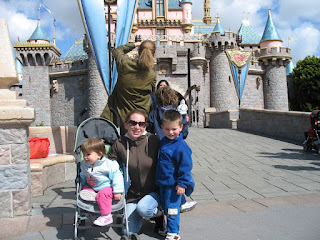 The first person we saw when we got through the gates was Mickey, leading a marching band.  Both kids yelled, “MICKEY!!!!”, unprompted by us.  Guess I was wrong.
The day was still unseasonably cool, which was AWESOME.  Being robust, stalwart Canadian types, we enjoyed the quiet grounds (even though it was a Sunday, and March Break, the park wasn’t busy at all), and just made sure to keep our fleeces zipped up.  With only two exceptions, we didn’t stand in line for more than 5 minutes.  Yep, wrong again. 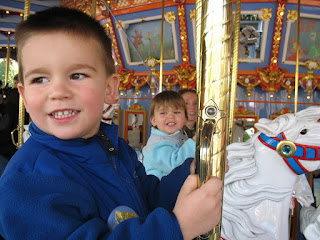 First stop, the carousel.  I was still feeling ill, tired, and sad, but tried to enjoy myself.   The kids’ smiles and giggles really helped – they were so blown away by everything they saw! 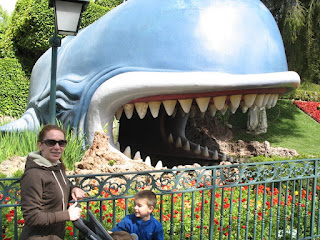 There is a picture, taken in 1974, of my mom in front of this very whale.  I made Chris take it despite my feeling a bit maudlin, as in the 1974 picture, Mom was very pregnant with my sister.  I was very aware that, despite hopes and plans, I was most definitely not.  (Guess I was wrong; it turns out that I was, but my body wouldn’t tell me for another month and a half.) 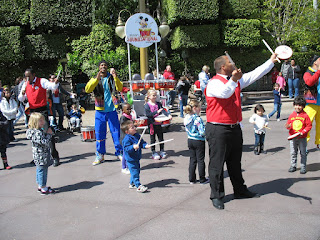 On the walk over to It’s a Small World, we stopped to watch a drumline.  Vaughn and Ailsa caught the beat, then Vaughn got to join in the drumming.  What a great experience!  Small World was delightful, and the kids still hum the song and sing a few words, five months later.  Guess I was wrong about their memory, too! 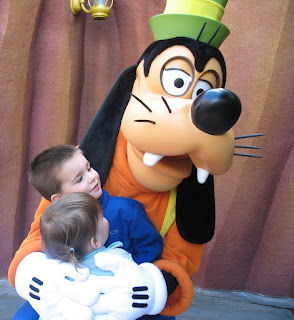 Next stop, ToonTown!  We followed Goofy around till we got hugs, and for something so big and, well, goofy, he wasn’t scary to the kidlets at all! 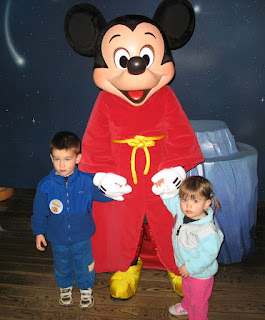 We finally met the man, the mouse, the legend.  Mickey was in the middle of filming a movie, but took the time between takes to meet his fans.  This picture doesn’t do the kids justice – they were so excited that the 15-minute wait flew by!  After the starstruck photos, they each gave him hugs, lots of waves, and “Bye, Mickey”‘s … and still talk about it. 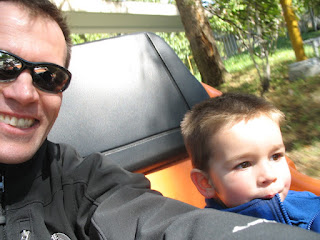 We stopped for lunch, then when Ailsa conked out in the stroller, Vaughn and Chris went for a drive.  I believe Chris operated the pedals, and Vaughn steered them into everything he could!  He still talks about his orange car, and Chris still laughs (nervously) about the experience. The last ride we went on was Nemo’s submarine, after a 30 minute wait, which I expected would be awful – really cool effects, beautiful scenery, and the Nemo storyline, too!  They weren’t scared of the shark or the angler fish at all, and just felt really lucky to have been on a submarine!  Guess I was wrong. 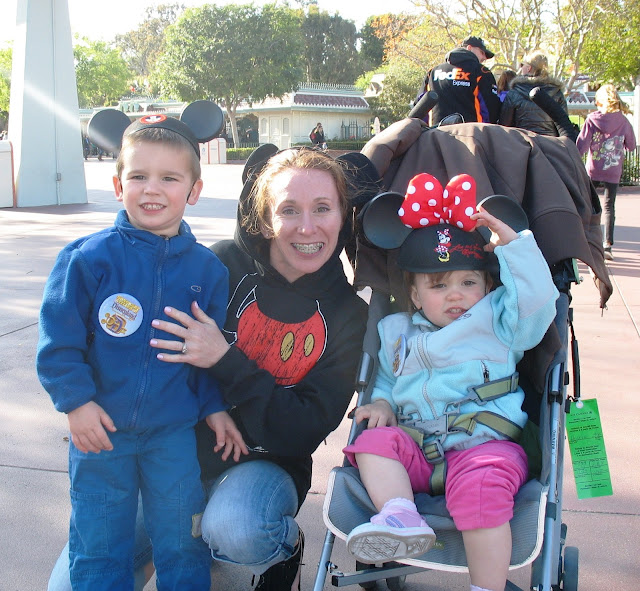 ﻿
After 5 1/2 hours of walking around the park on his own two feet (our little man is incredible…yet sometimes is “too tired” to walk to the end of our street!), we made the requisite stop for Ears.  Still smiling, and full of memories, Disneyland was something that I’m so glad we experienced together.  Vaughn, of course, is full of stories and specifics (and “It’s a Small World”), and Ailsa, as her language develops more and more, brings up surprising facts, which up to now have been hidden inside that amazing little brain of hers, about the day.  Guess I was wrong!
I’m not going to say that the vacation was in any way relaxing (even the spa part was somewhat stressful, due to the unfortunate “naked” bit), or good for my health, but I can’t thank everyone enough for their support and guidance, especially Diana, vacation-planner extraordinaire, who gave me the low-down on all the attractions and what the kids would like, Chris’ parents, who took the kids and gave me time off while they spoiled them rotten, and of course, Laurel and Mike, with whom we shared precious grown-up time.
Was it worth the (surprisingly limited) expense?  Definitely.  The kids had new experiences every day and remember the oddest little tidbits about their adventures, not to mention the bonus time they had with their grandparents, who they don’t get to see enough of.  The stress, illness, lack of sleep, and hormones I could have done without, not to mention the no-vacation-for-me-because-this-is-it (and no, bedrest is not a vacation)…and I would have loved to have Chris share in observing their curiosity and pure delight at everything we saw, but all’s well that ends well, I suppose.
After all, the next one will involve THREE Hufflings, and we’ll look back upon this “vacation” as easy.  Gulp.