Skip to content
This year, I put my order in with Grandma early.
In September, I told her, “Vaughn wants to be a lion.”
At the time, he pronounced it “yion”, but has been working hard and practicing, and now says the L perfectly. He is also very well aware of what a lion says. Often, you don’t even have to ask him. 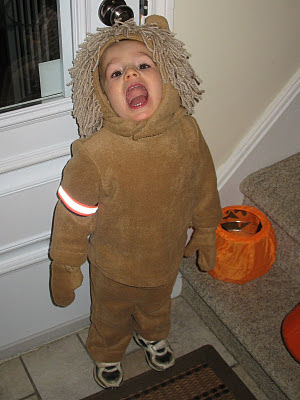 “Raaaaaaaarrrrr”
Ailsa, being a Second Child, got to be a wee skunkie.* She was taught that skunks say, “Fffttt”. She didn’t quite get the hang of saying “trick or treat”, but was very open to receiving candy and saying “sonkoooo” afterwards. 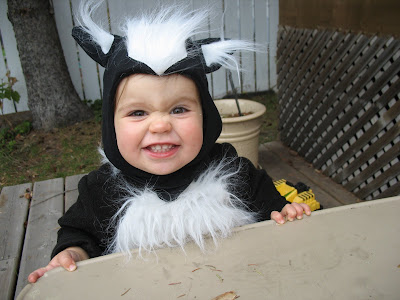 “Fffftttt!”
All in all, it added up to two beautiful costumes on two adorable kids (oh, the comments and praise and head-swelling…), and quite a respectable haul of candy. There aren’t a lot of houses in our neighbourhood that leave their lights on, but those that do aren’t stingy at all!
We also ran into the Vanier Beautification Committee, doing a walkabout, to promote safety and community spirit. As much as some days I don’t like walking home through all the unsavoury areas, I really love that there is so much passion for turning our community into a safe and wonderful place in which our kids can grow up.
Post-Halloween, the nightly discussion is on how much of the stash we will letting the lion and skunkie eat, balancing between being bad parents who deprive their kids of the candy they worked “hard” for, and bad parents who let their small children eat candy. We’re still duking it out between eating it all ourselves and getting fat and… I forget the other option. Pass the rockets.**
Despite living pretty close to downtown, we get a surprising assortment of wildlife in our backyard. Luckily, they’re usually quite tame. 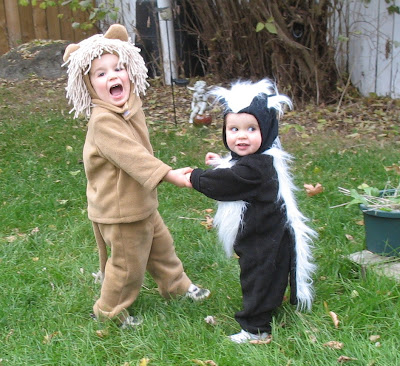 * Guess what she gets to be next year?

** Jenny: we also got a nice amount of crap-in-my-mouth. YAY! Which Chris likes, too. Booo….