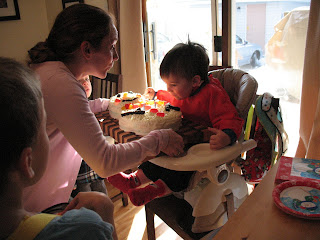 My little boy is growing up! Snif. And into a 2-year-old!

It’s been quite the month for Vaughn: the ramp-up to Christmas, Christmas morning, Christmas afternoon with my parents, and all this followed by a vacation in Vegas to visit Grandma (Christmas again!)… so when his birthday rolled around just a few days after that, well, more presents weren’t just de rigueur, they were demanded! They don’t call them the Wonderful Twos for…waitaminute…

But first, a retrospective:

Remember when I complained about my little Tapeworm? Awww…. 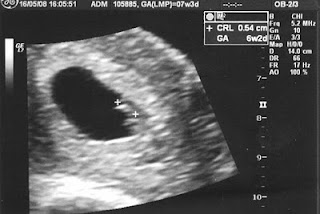 Somehow, this phase wasn’t as adorable. I called this “GET. OUT. NOW.” 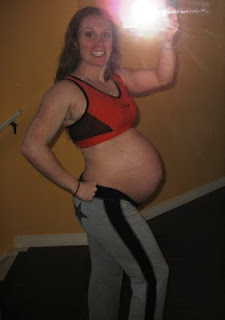 The evening after his arrival, he was charming everyone with his cuteness. But mostly his hair. 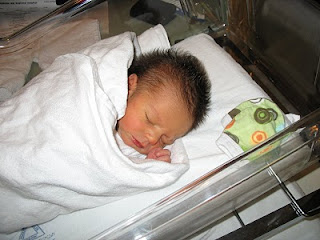 So, here he is on his second birthday. He did quite well in sharing his toys (not that he had a choice – there was a house full of 2- and 3-year-olds (and Logan and Jodie too, of course!), and they all thought his toys were as cool as he did), not melting down, and generally hosting-with-the-mosting. 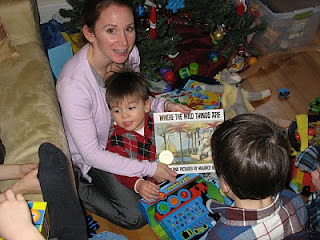 But don’t try to take away his marshmallows. Too bad this photo doesn’t have sound… it would be a very quiet, yet menacing, “rrrrrrr…..”. The Marshmallow Snowmen segment of the birthday party (Yes! a Clipboard of Fun, Inc. Event!) was a much bigger hit than I expected, and it was hard to refocus the kids from that to the present-opening. Odd. 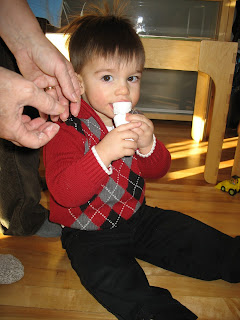 The original plan was to send them all outside for Snowman-Building with the dads. Alas, it wasn’t sticky snow, but I managed to kick most of them out for about 20 minutes or so, anyway.

Vaughn, in yellow, outgrew his snowsuit at about 12:01 am on his birthday. We stuffed him into it anyway. 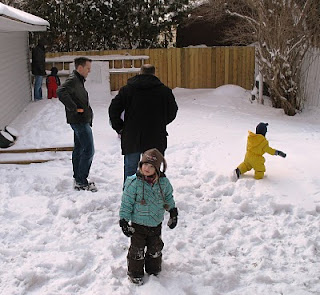 The cake was a hit. The recipe, of course, was for Mrs. Whitman’s Birthday Cake, a family favourite, and it’s mortared together with TWO batches of buttercream icing (for those in the know, that’s a total of 8 CUPS of icing sugar), since there was an “incident” while transporting one of the layers from one table to another. More icing? More icing! Good! Now cover it with candy, too! Nice one, DG! (pat pat) 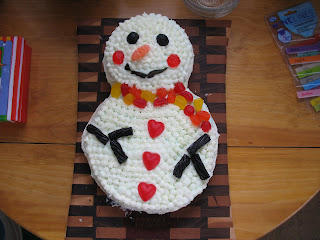 We even practiced blowing out candles the day before his party. He sort of got the idea of it, but in the process, lost a bit of hair. (“Eyebrows,” he said, suddenly.) That’s ok, he still has lots.
All in all, we still like him. His creative expressions of distaste and/or anger seem to be louder and more frequent than before, but we figure that, as he gets used to being back home, not being showered with gifts daily, and having to listen to Mommy and Daddy, he’ll straighten out.
He has a year.
Also, thanks for the drum, Uncle Rob! Vaughn is looking forward to spending the summer with you.
This is a daily thing. Note the development of a “drum face”…on its way to becoming a guitar face one day.