Skip to content
The Ongoing Adventures of a Boy Named Vaughn 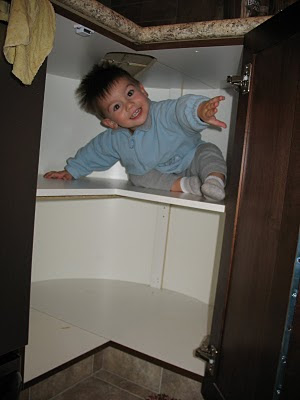 Before leaving the Hat, V checks out the empty cupboards.

So, the V-man is growing and changing before our eyes. On the first morning in the hotel (leaving the Hat, October 15th-ish?), Vaughn said his first sentence. Chris had gotten up to get some fruit from the breakfast buffet, and Vaughn said, “Daddy take oranges Vaughn”. Hey, there’s a subject, and object, a verb… since then, he hasn’t stopped.

It blows our minds to listen to the changes in just a month, but now he differentiates between wanting something (“Vaughn see dumptruck?” “Vaughn have more broccoli please.”* “Vaughn ask Daddy for chips.”) and actually doing it (“Vaughn holding Ailsa’s hand.” “Mommy eating chocolate with wine.”). The kid is using verb tenses, often correctly! And possessives! And prepositions! He has a bunch of favourite words that are somewhat oddly pronounced, but I love listening to him say them… speakers on!

The downside, of course, is that he can now tattle on you really well.

Since we didn’t have Thanksgiving before the move, Mom and Dad offered to host it at their place, for everyone, on the Saturday night after we arrived. The whole fam damily was there: Tracey and Jason, Logan and Jodie, Uncle Ryan… and things went well till just after the delicious dinner (including pumpkin pie and birthday cake** for Grandpa), when Uncle Ryan said, “I think he’s stinky.”

Well, I am ashamed to admit that I didn’t act on this information as quickly as I should have; I think I was distracted, or feeding Ailsa, or something. But about five minutes later, Logan shouted, “What is that?” And Chris thought, “Hey! A meatball!”

So, now we can look back and remember, fondly, The Thanksgiving that Vaughn Pooped on the Floor. 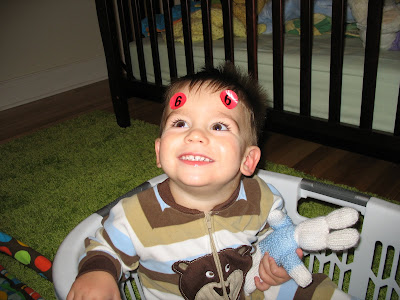 Nobody move! We seem to be missing a six…

Halloween was a hit again. He woke up that morning covered in vomit (boooo), and was a bit mopey all day, not wanting to wear his costume (skunk costume number two! Thanks, cousin Logan!).

Until the first kid, a little girl dressed as a witch, knocked on our door.

“Caaaandyyyyy!” she yelled, holding out her bag. Her dad, at the foot of the steps hung his head and said, “It’s trick or treat.”

Well, Vaughn took one look at this, put two and two together, and dragged me over to the costume. “Vaughn skunk on.”

So, out we went, and at the very first house, I told him, “Say ‘Trick or Treat'”, he said, “Tricker treat!” and got a handful of tricker treats (naturally), after which, I told him what to say: he bowed his little skunk head and said, “Sankoooo.”*** The next house, he needed no coaching. At the third house, the woman gave him the tricker treats and then said, “Bye-bye, Skunkie!”

Well. Skunkie giggled his way to the fourth and final house, repeating “bye-bye Skunkie” the whole way. Daddy was a bit miffed to see us back so soon (hoping for a bigger haul, no doubt), but it was cold out, and I had a spider-girl stuck to me. Etcetera. Besides, too many tricker treats in the house just lead to demands and tantrums. 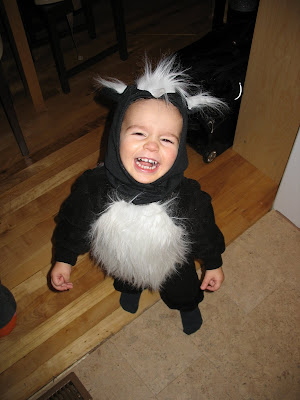 Vaughn and I have this thing: we go grocery shopping every Sunday. Daddy stays home and does laundry, and Vaughn and I (and usually Ailsa, unless she’s napping) go and have a good time. We browse the aisles, we talk about food, we put five apples up on top and V charms the pants off the sample ladies so that he gets things like ice cream and cookies while I’m looking at a label of bread crumbs or something.

We were walking through our local Loblaws, and went up to a sample lady who had cheese and crackers. She walked around her stand and told me that another sample lady had told her that I had the most beautiful baby she had ever seen, so she had to see her for herself. (Of COURSE I have the most beautiful baby! Biased, moi?) Ailsa apparently fluttered her lashes and flashed her a million-watt grin, and was appropriately cooed over. Vaughn, meanwhile, was munching away on his snack, happily ignored.

So the sample lady then realizes that she’s leaving him out, turns to him and says, “Oh, and you’re very handsome too.” Vaughn looked at her very seriously, and said in a bored, of-course-I-am voice, “Sankooo. Bye-bye.”

* Seriously. The kids loves him some broccolis.

** Vaughn, of course, loves birthdays. Or “Happy Jesus”-es, as he calls them, thanks to The Story of Christmas book that he has, because at the end, you say, “Happy Birthday Jesus!” or whatever you can pronounce at 22 months old, which is “Happy Jesus”. The kid cracks me up.

***He’s been using the sign-language “thank you” for about a year now, but only recently has even attempted to say the words. But, thanks to Let’s Dance, Little Pookie, he now bows and says, “Sankoooo” like a pro. And he’s very good at using it, much to my delight: “Sankooo, Mommy.” Awww….