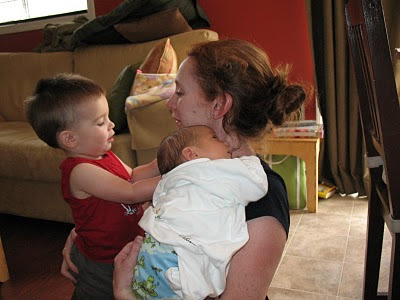 Well, the droves of grandparents have all returned to their respective homes, much to my horror and dismay. They were all such fantastic helps — I honestly don’t know what I would have done without you! Vaughn still points at random old people (ha ha) and says “Bompa”!
I’m somehow still upright (but on my way for a nap – V’s in daycare twice a week for 3-5 hours, just so he can play with his friends and I can have a bit of one-on-one with Ailsa, and I can’t miss this window!), but am really wondering how other people cope. I find it a challenge, to say the least, to juggle the Screamerpillar and the Vaughnpire – it seems that if one isn’t melting down, well, they both are.
Nights are going better – V goes to bed like a champ at 7:30 – throw him in his crib, give him a kiss, and he’s all set till 6:30. A is more challenging – she reeeally doesn’t like going to sleep, but once she’s out for the night (usually around 9), she wakes up around 1 and 4, then is up for the day at about 7. Chris is really being amazing at doing the Vaughn Routine in the morning, since I’m busy at that point feeding Ailsa, but we’re going to have to figure something out soon…something about Chris being late every day…!
All in all, I’m a bit of a soggy mess, and sometimes only call Chris once a day, crying. But I have faith that at 6 weeks, she’ll be an angel baby. It could happen, right?
Right?

Ok, it’s time to get out your Mortimer* and follow along at home!

Vaughn’s 18 month stats are as follows:
MY child! Above normal for height! Can you believe it?
I SWEAR that nobody posed Vaughn for this – he just plopped down beside his little sister and mugged for the camera, or the “cheeeese” as he calls it. 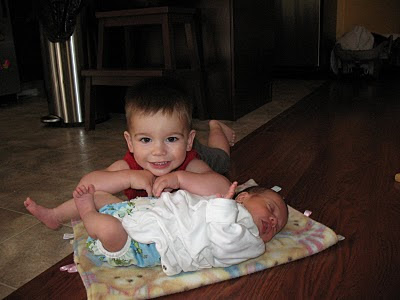 Speaking of words, he’s up to about 100 identifiable words – a lot of them come out of nowhere – he’ll point to something, name it, and leave Chris and I wondering what else he knows that he’s not telling us! If he gets stuck, all he needs to do is say “pleeeeeease” and make the sign for please and look up at us beseechingly. It works on nice grocery-store-sample ladies when Mommy’s not looking, to get cookies, ice cream, you name it! Little stinker.
He also says “potty” or “pee pee”, just after he’s peed in his diaper! Well, it’s a start.
And this photo, well, this is what I love about the Vaughnster – it just sums up his personality perfectly! The world may be ending, but everything is still awesome. 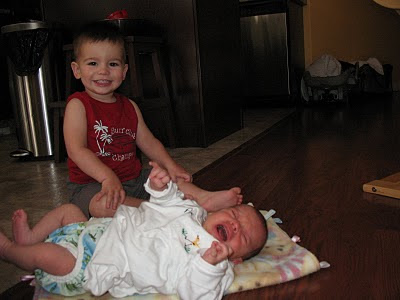 And finally, although he stole the iPod from Grandpa, he gets his moves from Mommy:
*Any other 80s kids out there that get this reference?

1 thought on “One Month Later: What a Family!”