Who likes Halloween more than I do? 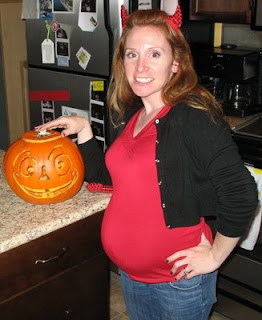 This year’s costume was a bit of a logistical challenge, for obvious reasons. At right, you’ll find my full-day-at-work-and-then-a-party-that-night costume. Not offensive, not ill-fitting…

However, there was no way that I couldn’t share my Parade of Ill-Advised Halloween Costumes with you.

Hope you appreciate the selection of costumes that I considered… sensitive readers, please be warned that you may not like what you see. I apologize in advance for offending anyone’s sensibilities. 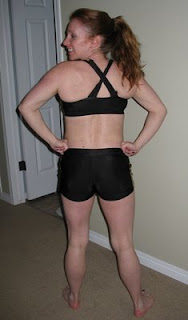 Hmmm… it’s fine from the back… 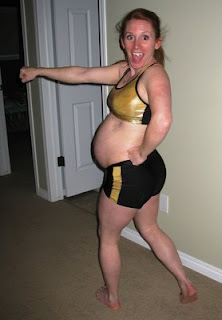 Whoa! Maybe a little more time should be spent on your abs, sister.

The Olivia Newton John Let’s Get Physical costume is a flashback to the early 80s, and also my first year at CNA (2002?), when I was the only one in costume, of 85 people! This look just wasn’t working this year… but wow, lycra sure can stretch!
I admit that there was one more. For a work luncheon on Wednesday, I decided to just go with it, and hope that others’ senses of humour would keep me from being lynched.

Possible captions include The Smoking Nun and Bad Habits. Now, usually, I publicly humiliate for a whole lot less… ok, free… (see above), but I won $50 for Best Costume!
I had really tried to do proper recon ahead of time to make sure that there were no “secret nuns” working at the base, and I was assured there were not. Unfortunately, the first person I saw was the padre.
Whoops.
We handed out candy to 14 kids last night. Ordinarily, I’d be disappointed by such a low turnout, but then, I take a moment to reflect on how much candy we have left… Aaaah.
Hope everyone else had a wonderful Halloween!