In which the whole fam damily (cK and the K-rents – which, Dave Barry, would be an excellent name for a rock band) has many adventures, once Dad recovers a bit from the worst-sounding chest cold ever. Photo highlights include Games Night, in which everybody else obviously cheated at Scrabble, Cranium, cribbage, etc. and lots of DG-ing (and D-God-ing, too).

I went out for a run through the coulee (quite unlike coulis, for those of you unfamiliar with Hatular topography), to the tepee and back, in wind so strong that I was tempted to walk/throw up/lie down/launch myself into the coulee on several occasions. I believe that it’s about a 6km route, but it took me 40 minutes of intense exertion in order to return home, red-faced and nauseous. The joys of fitness, I know.

After a stretch, a heavenly shower, and a quick nap, I was ready to start cooking again. 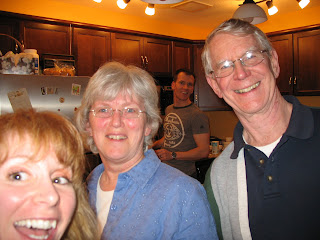 Let me back up. The ‘rents had arrived on Thursday night, and it was a fiesta for gourmets and gourmands alike, every night. After a long day of travel, my parents were treated to a nice little spread of cranberry-hazelnut rainforest crackers, cream cheese, and a cabernet paste, with scotch for the boys and wine for the girls, followed by Mom’s chicken casserole, tweaked and en-healthened by me (less rice, half fat cream of chicken and celery, light mayo, potato chips crumbled on top… ok, I didn’t en-health the chip topping — it’s too good!).

Good Friday got us up and moving with a nice hour-long walk through Kin Coulee park, then we took Dad, who suddenly developed a bad cough, home. Chris and I started on our Domestic Goddess- and God-ing; he prepared an amazing meal of salmon with marinated red peppers, olives and sun-dried tomatoes (he stuffed a chicken breast with the same ingredients, plus feta cheese, for me), while I started the prep for the previously-mentioned pork and beans chili mole, which apparently tastes better after sitting in a fridge overnight. Easy preparation, once you cut the pork tenderloin up. Luckily, I have a sous-chef, Christophe Encraque, to do that for me. 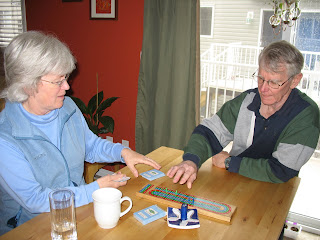 Meanwhile, we got Mom and Dad totally hooked (but no worse than we are) on Heroes. Chris went out for his run, and I made a warm potato salad (mini potatoes, a few hard-boiled eggs, some green onion, olive oil, balsamic vinegar, grainy dijon, and a touch of mayo) and a green salad. Appies of brie and Madagascar peppercorn cheese, as well as a nice PC pate started us off. Yum!

Let us now briefly discuss Games Night. Frankly, some of the “adults” participating in these games are too smug for their own good – you can’t be a sore loser AND a poor winner! You just can’t. That’s all I have to say about that.

Saturday was the dinosaur day (from previous post), so I had the day off of cooking, aside from the cornbread to go with the chili. Chris, meanwhile, put the strawberry rhubarb tiramisu together, and made a little one for a “tester” with dinner. The chili was reheated, the cilantro and chocolate (the secret ingredient! shhhhh…) were added, and it was ladled into bowls, sprinkled with grated cheese, some green onions, some chopped tomatoes, and a dab of sour cream. We opened up a bottle of Ravenswood Vintner’s Blend Zinfandel, which was paired with the chili in the magazine — we figured that they probably knew best — and had another amazing meal. 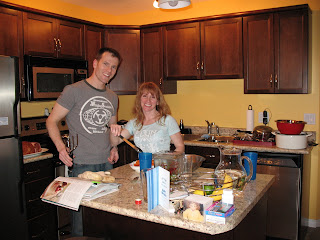 Before bed, we prepared everything we needed for a delicious breakfast casserole (sausages, hashbrowns, eggs, and gravy, in a crescent-roll crust)… it just didn’t end!

Easter Sunday was nice – we started with brunch, then I don’t believe we needed to eat again till dinner. We followed Chatelaine’s Easter dinner menu, and ended up with a delicious glazed ham, roasted carrots and asparagus, and a dill-icious orzo and belgian endive salad. Somehow the chefs didn’t kill each other throughout (a bonus of finally having a bigger kitchen!) and everything made it to the table at the same time.

Everything was absolutely delicious (Ok, the carrots were a bit crunchy, but that means they have more vitamins, right?), and we ate so well, had tons of leftovers, and still have half a ham in our freezer! Chris left early on Tuesday, and I didn’t have to cook for the rest of the week! 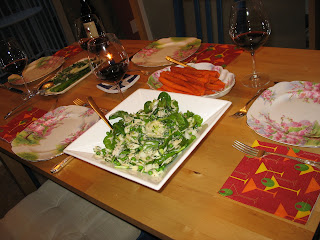 Vegetarians, avert your eyes. I give you Ham! 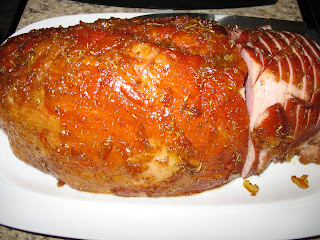 We had a little adventure on the way to the Medalta Historic Pottery Site: 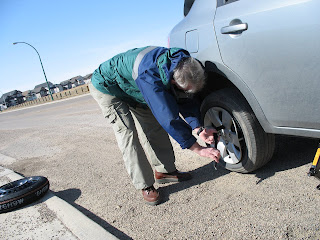 And what do I do with myself when Chris is away? 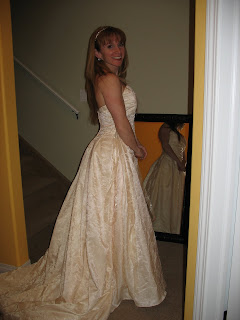