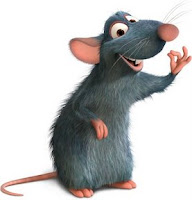 Last night’s challenge was inspired by a totally fantastic Disney movie of the same name. The main difference between me and the chef from Ratatouille is that he’s a clumsy redhead who has a Very Talented Rat on his head, controlling his cooking abilities, whereas I am just a clumsy redhead who WISHES she had a rat on her head… but I digress.
A little background on preparation, etc.
As I had a gym date with Meaghan after work yesterday, I knew I’d need to make a quick meal when I got home, since I also knew that SOMEONE would be cranky and hungry. We’ll call this imaginary person “Fis”.
I decided to start on Tuesday night, chopping and sorting all of my ingredients. Therefore, when Chris or I got home on Wednesday, we would just have to add the numbered baggies to the giant pot, and cook away! Also, it gave me something else to report to Chris on what I did all night, besides “my nails.”
I peeled and chopped a medium eggplant and 2 unpeeled zucchinis into “1-inch cubes” (actually 2-inch rhomboids – my chopping needs work). They went into my “Ratatouille-by-Numbers Container #1”. Three-quarters of a medium onion was chopped and put into baggie #2. After that, 2 red bell peppers were cut into (sorta) 1-inch (kinda) squares, as was one of those previously-mentioned one-clove garlics. They went into baggie #3. Everything went into the fridge, along with a baggie with two chicken breasts*. The big pot was put on the stove, with the salt, pepper, thyme, bay leaves, olive oil, and a can of diced tomatoes beside; everything was ready to go.
The creation of a culinary masterpiece
I got home at about 7:20 (Meg and I not only did shoulders and chest, but she also saved me from Creepy Gym Guy twice…then we needed a salad to wind down afterwards), and preheated our giant Mario Batali Italian Essentials 6 qt. Pot (thanks, Sean!) with a bit less than 1/4 cup olive oil, on high. In went the first baggie. For about 10 minutes, I stirred and flipped, until the zukes and eggplant were sort of golden. They were then removed, and the heat was reduced to medium-high.
Next, the onion baggie was emptied into the pot, with 2 more Tbs of oil (note that I didn’t use the term “low fat” to describe this dish), and sautéed until it was translucent. Meanwhile, I chopped the chicken into wee bits, and added that, too. When the chicken was browned, I emptied baggie #3 in, and stirred the peppers and garlic around till they were soft.
In went the tomatoes (drained), with a few extra cherry tomatoes from Meg’s garden, some thyme, a bay leaf, not enough salt** and pepper. Covered, the heat reduced to low, it simmered for 5 minutes. I added the eggplant and zucchini back in, stirred it up, and let the flavours meld for 20 minutes, then added the final touches: about 3 Tbs. finely chopped black olives and 1/4 cup of fresh basil from my garden. I ladled it into bowls, and served it… 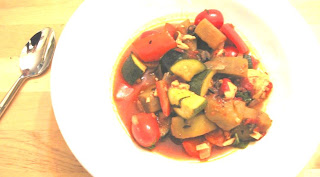 The verdict
Very good! Chris would “ask for it again”! It’s a beautiful dish with vibrant complementary colours, a great smell, and good texture, but would need more protein next time to boost the nutritional value. Also, I was so focused on the main dish that I neglected to add any carbs for the resident marathoner… next time, I’ll make tea biscuits too.

This is an actual, unretouched photo of my ratatouille.

*Ratatouille is generally a vegetarian dish, a chunky, hearty, savoury vegetable stew, but hey, our household needs protein to maintain its MBQ (manly biceps quotient), so chicken had to be added, too.

**I consistently under-salt, which I contend is better than over-salting, but I hope to get to a happy medium at some point.