After polling all of my closest friends and random strangers, I decided that I wanted to be a princess. And since I can’t BE a princess, the next best thing is to LOOK like a princess.
So, I brought in a printout of a few different styles, gave it to the Fabulous Kim (we reminisced about the good old days with the Renegades, and how we both miss it), and in just an hour, with only 2 lbs. of bobby pins, 3 cans of hair spray, and 55 minutes of backcombing, voila! The frog was transformed! 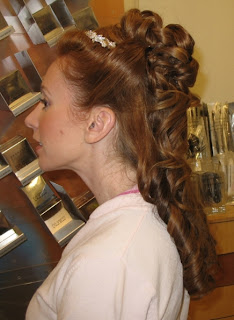 Well, mostly. Then there was makeup.
I went over to see Sylvie, who analyzed me out loud. Turns out that I don’t actually have standard redhead colouring, since I have pink undertones, or something. Also, I have deep set eyes, which 1) I don’t think is a good thing, and 2) are you really supposed to point out flaws to your client? (but Mom said it means I have really big lids, and that I get it from my father’s side). I digress.
Concealer. Foundation. More concealer. Primer. Liner, shadow, mascara (but not black – in fact, I should throw out my black mascara and only use dark brown. WHAT???). Liner, lipstick. Blush. Bronzer. Powder. Voila.
My advisors (Mom and Bec) were actually clasping their hands under their chins and gasping with delight, they liked it so much! 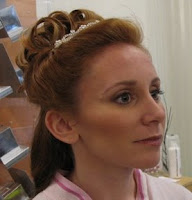 Well, it was different than I usually look, that’s for sure, and I wasn’t completely convinced that it was good. It held up quite well for the night (more on that in a sec), and aside from a titch too much blush, I guess it’s something that I can live with for one day.

Fast forward to driving home, and waiting to get picked up by friend and new boyfriend. Now, it’s always nice to meet new people, but it somehow seems more awkward when they’re like, “Hi. You’re wearing a tiara.” And then all you can say is, “Yes. I always look like this,” before you get in their car. So anyhoo, I made it to the Arrow & Loon, and 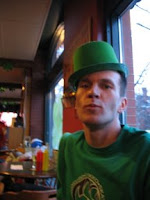 walked in, all self-conscious-like. (that continued all night, actually) But Chris (aka Chris O’Toole, aka Chris Murphy, aka Harrigan) loved it. I got many compliments, kisses, and squeezes. Of course, I don’t know how many beers he had before I got there, but I won’t question.
It was sort of awkward, though – running into people, and their eyes drift up to the tiara, and then you have to explain it all again… until I decided just to say, “because I’m a princess.” And that worked – no more questions asked!

But yeah, I was all nervous and jittery all night, even after quaffing quite a bit of supposed “muscle relaxant” (quick, what book is that from?) – but this has become a normal state for me – trouble sleeping, always vibrating and tense… tell me this will go away after the wedding???